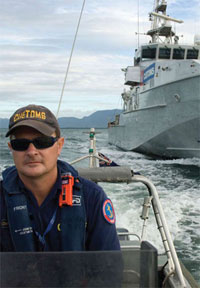 The Australian Customs and Border Protection Service says it will be difficult to “stop the boats” when it has to cut 600 staff members in coming years.

The federal agency charged with protecting our borders from illegal incursions of people, weapons, drugs, money, diseases and other threats says its “current operating model is not sustainable.”

“Meeting the requirements of our service and meeting fiscal policy directions will require very tough choices to be made,” he said.

“However given the efficiencies that we have already identified and achieved, many of these choices have already been made.

“With program reductions that are in the forward budget, we are not talking about cutting fat or even muscle and tissue, we will soon be going through bone and out the other side,” Mr Pezzullo said.

The agency chief revealed that heads have already been rolling at the ACBPS; with its budget diminished by $560 million over the last four years he says it has had to cut 740 positions.

Upcoming cuts of $733 million for the next four years mean 600 jobs will go.

“Given the high operational tempo being experienced across many areas of the service, we are trying to maximise our expenditure on frontline resourcing, for example to deal with illegal maritime immigration and remote area border patrols in northern Australia.”

“Last year, our $10 million loss was attributable to a large voluntary redundancy program in the order of $7 million and ongoing operational pressures,” he said.

“This year will see a continuation of those same pressures combined with larger funding reductions.”