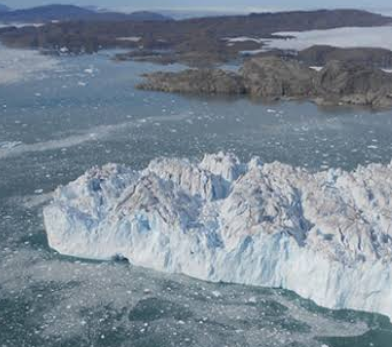 The mass of Greenland’s ice cap melt has been measured by satellites.

In late July, Europe suffered its worst ever heatwave, leading the icy nation of Greenland to suffer the second greatest melt event in recorded history.

Even the highest point in Greenland — above 3km in altitude — reached temperatures above zero.

As the heatwave hit, Paul Tregoning from the Australian National University in Canberra was waiting for data from NASA's new GRACE-FO mission.

GRACE-FO - or Gravity Recovery and Climate Experiment Follow On - uses a pair of satellites to weigh the Earth's water from space by detecting tiny changes in gravity.

“One satellite is following 200 kilometres behind the other,” Dr Tregoning says.

“The change in distance between the satellites is measured really accurately, down to a 10th of a thickness of a human hair, or about a micro-metre.

“If there is less ice in a location, then there'll be weaker gravity that will affect the change in distance between the satellites, which is what we measure.”

Greenland is losing weight as it melts, which affects how the satellites orbit Earth, which can be detected in the measurements made by GRACE-FO.

Dr Tregoning’s measurements show that Greenland weighed almost a third of a trillion tonnes less in September than it did the previous month.

Over the entire summer, the melting was more than 10 times the 30 gigatonnes melted in the 3-day heatwave event.

“The mass loss in Greenland between August and September 2019 would amount to 42 millimetres of water covering the whole of Australia, or 4.7 metres over the whole of Tasmania,” he said.

Dr Tregoning says ice loss varies from year to year, but the trend is downward.

“From mid-2003 to mid-2019 there has been the equivalent of about 2 metres of water scraped off the entirety of the Greenland ice sheet,” he said.

“If you then convert that into the effect that it would have had on global sea level, the amount of ice that has melted from Greenland since the beginning of the GRACE mission has added about 12 or 13 millimetres of water across the whole of the global oceans.”

It is a signficint amount from a single source, given that there has been an average 20-centimetre sea level rise historically since the industrial period.

“And now it's a major and possibly accelerating contributor to the rise.”