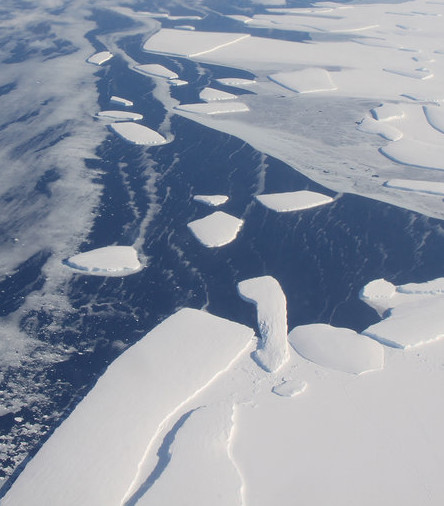 A 1 trillion tonne iceberg has broken away from Antarctica, signalling a new chapter in the life of the frozen wilderness.

The breakaway of a large chunk of the Larsen C ice shelf has been telegraphed for some time, but now that it is drifting free, scientists are hoping it will renew interest in Antarctic climate systems and what they can reveal about the state of our planet.

“The calving of this huge iceberg from the Larsen C ice shelf is deeply troubling,” says Professor Ian Simmonds from the School of Earth Sciences at the University of Melbourne.

“This follows the collapse of part of the Larsen B ice shelf (to the north) in February 2002. The causes of these breakups are similar.

“Temperatures have risen dramatically in the region over recent decades. This has meant that summer temperatures now frequently get above freezing, and the associated surface melting significantly weakens the ice shelves.

“In addition, the major warming of the sub-surface Antarctic Ocean is strongly impacting on the thick ice shelves from beneath.

“This is happening when the area of the Southern Ocean covered by sea ice (floating frozen sea water of thickness about 2 meters) has plummeted to record lows.

“Monthly record lows (since satellite monitoring started in 1979) were observed in each of the six months October 2016 – March 2017, and second lowest in each of the last three months.

“This very low coverage is particularly concerning in the summer period, where the newly ice-free ocean can absorb massive amounts of solar heating during the long summer days.”

Professor Nathan Bindoff - Professor of Physical Oceanography at the University of Tasmania, head of the Oceans and Cryosphere Program at the Institute of Marine and Antarctic Studies (IMAS), a Chief Investigator in the ARC Centre of Excellence in Climate System Science and leader of the Climate Futures program at the ACE CRC – shares those concerns.

“Big 'bergs breaking off the major ice-shelves are a critical component of the story around the fate of the Antarctic Ice Sheet,” Dr Bindoff said.

“The ice shelves buttress the Antarctic Ice Sheet and slow the rate of ice loss from Antarctica. So a major 'berg like this one means we will see an acceleration of the grounded glaciers behind the Larsen C shelf.

“Amazingly, this glacier acceleration will contribute to further sea-level rise in next few years. We saw precisely this behaviour for sea-level when the Larsen B ice shelf broke up.

“The bigger picture concern is that ice shelves are thinning around Antarctica, implying more events like this one, and more acceleration of the glaciers that feed the ice shelves.  To my mind, this is the million dollar question around Antarctica; ‘How fast is it going to melt going into the future?’”