Reefs hit by phosphate mine 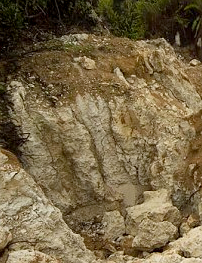 The study looked at coral reefs in an area that has seen extensive phosphate mining for around 100 years.

This pollution has caused a slowdown in reef growth and diversity.

“The major problem is sediment pollution from the phosphate mine. On a healthy reef, the sediment will be made from reef organisms – including worn down shells and bits of coral,” Dr Mallela said.

“If you have a lot of run off and pollution, the sediment becomes dark and quite sticky. It actually smothers and sticks to the reef organisms, and can kill them.

“It also clouds up the water column, so it stops the light from penetrating down. Coral is part plant, part animal – the plant component needs to photosynthesise, so if the pollution reduces the light levels on the reef you take away part of its feeding regime.”

“They’re the coral species that juvenile fish like to live in; they’re the ones that give a lot of structural complexity to the reef. They were missing at the really polluted sites,” Dr Mallela said.

“There’s also a type of hard, pink algae that is really important for the recruitment of baby corals. The levels of that algae were really, really low, if it was there at all.”

“The most heavily polluted site was where they store all the phosphate to dry. Obviously they could put in some kind of physical barriers or erosion control to stop that phosphate running off into the reef,” she said.

“If they’re mining the phosphate for fertiliser to sell, it doesn’t make sense for the phosphate to be washing off into the ocean. It makes sense to have good management strategies in place not only for the environment, but for the business too.”

The study is available here.