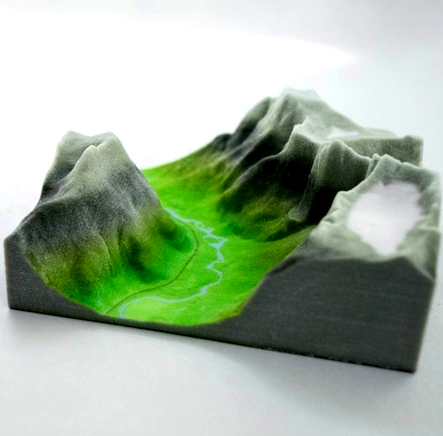 The WA Department of Agriculture is taking a high-tech approach to land and water surveying, using 3D-printers to render the vastness of the outback in a small scale.

Researchers working with the Department have successfully printed a model of the La Grange project, south of Broome, in the Kimberley.

It is primarily intended as a presentation aid and communication tool, but the idea could have some seriously useful applications.

Researcher Nick Wright has told the ABC that the project is breaking, and printing, new ground.

“We spent ages trying to find other researchers who have used 3D printers to represent hydro-geological interactions,” he said.

“But in this regard, we ended up kind of pioneering this technology.

“We were looking at the Broome aquifer, within La Grange, where it falls and how it flows from inland towards the ocean.

“So once we were able to print out the model, with these interlocking layers, the benefit is that you actually hold it in your hand and rotate it round to really understand it, as opposed to seeing it on a flat surface.

“It's not meant to be a super-precise representation of what's going on.

“It's about creating a conceptual model, so people understand how the different units interact with each other.

“We were using it at a seminar a couple of weeks ago, to explain the data we've collected over the past couple of years about the irrigation opportunities and constraints,” he said.

He has also printed a model to describe the water run-off at WA’s Muchea saleyards.

“We printed out a model to show the water shed areas at Muchea, so we could see water drainage paths,” Mr Wright said.

“It's so applicable. To turn a farm into a 3D model of the topography would probably take a couple of hours of software manipulation.

“You could print it out in an afternoon and see the features of what you've been driving over for the past 50 years printed out in the palm of your hand.”

After outlaying a few thousand dollars for a good 3D printer, Mr Wright said the production of the model was pretty cheap.

“A kilogram of plastic costs maybe $30, and for a model you only need a couple of hundred grams,” he said.

“So once you have the machine, the ongoing cost is essentially nothing.”