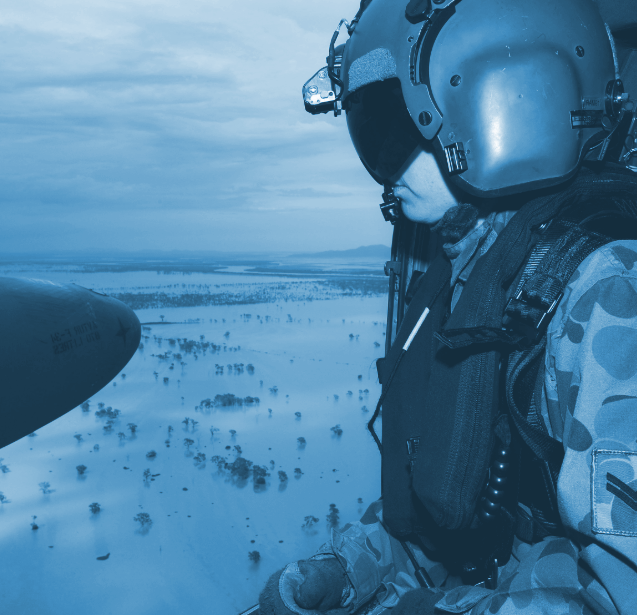 An increase in natural disasters caused by climate change will stretch the capability of the Australian Defence Force (ADF).

A speech prepared for General Campbell has been obtained under freedom of information. It was intended for an invitation-only retreat in regional New South Wales in June, bringing together managers from government departments and agencies.

It warns that a changing climate has “the potential to exacerbate conflict”.

General Campbell says his actual presentation was “extemporaneous”, drawing on “key facts and vignettes” from the written speech.

The speech describes Australia as part of “the most natural disaster-prone region in the world”, where “climate change is predicted to make disasters more extreme and more common”.

It says the ADF would need to commit significant resources climate change-driven responses.

“Australia sent around 1,000 troops to support Operation Fiji Assist [after Cyclone Winston], about 1,600 ADF personnel assisted after Cyclone Debbie hit Queensland and earlier this year, close to 3,000 troops helped North Queensland clean up after the floods,” the written speech states.

“At the height of our involvement, we had about 1,500 troops in Afghanistan.

“The number of troops deployed on disaster relief missions can, at times, be a significant commitment for Defence.

“Deploying troops on numerous disaster relief missions, at the same time, may stretch our capability and capacity.”

The speech warns that ADF will be called to assist in the wake of natural disasters around the world, and could also be pulled into more conflicts.

It says the Syrian civil war was combined with a climate change-induced drought “added enormous pressure” to existing problems.

“Defence may also be increasingly called upon to support stabilisation, governance or peace-keeping activities.”

The written version of the speech also covered Federal Government's actions on climate change and how they could affect relationships with Pacific island nations, which have called on Australia to do more to reduce emissions.

“It could impact our ability to influence their choices for support in the region,” the text says.

Labor's spokesperson for the Pacific, Pat Conroy, says it does not matter whether General Campbell delivered the speech verbatim.

“It doesn't actually matter whether it was given or not,” he said.

“This was the final speech, signed off by all of Defence, including the Chief of the Defence Force, as their official views at this forum on climate change as a national security threat.

“If this is in a prepared speech for an outside event, you can guarantee Defence is giving this same advice to Government.

“I'm heartened that the ADF is thinking about this seriously, as they should, and projecting into the long term.

“[The] Government is clearly not taking it seriously, otherwise you wouldn't have a very weak 2030 target that they have no hope of achieving.”