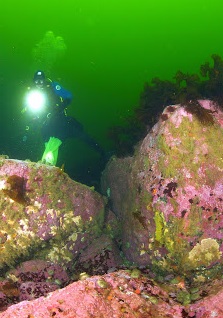 The ebb and flow of annual changes in sea-ice cover is reflected in the algae underneath, allowing scientists to plot changes in the ice by counting the ‘age rings’ of water plants.

Almost 650 years of annual change in sea-ice cover can been seen in the calcite crust growth layers of seafloor algae, a new study from the University of Toronto Mississauga (UTM), says.

The technique could be extremely useful for climate models, which often rely on satellite data dating back only a few decades. Using the conditions recorded by algae, it may be possible to extend our knowledge of sea-ice cover by several centuries.

Some algae's growth rates depend on the temperature of the water and the light they receive.

As snow-covered sea ice accumulates on the water over the algae, it turns the sea floor dark and cold, stopping the plants’ growth, and when the sea ice melts in the warm months; the algae resume growing their calcified crusts.

The continuous cycle of dormancy and growth results in visible layers that can be used to determine the length of time the algae were able to grow during the ice-free season each year.

To find this out, a team retrieved specimens of the alga Clathromorphum compactum from near-freezing seawater during several research cruises.

It was chosen because of its extremely long lifespan, its distribution throughout Arctic regions and because it forms thick rock-like calcite crusts on the seafloor in shallow waters.

“This is the first time coralline algae have been used to track changes in Arctic sea ice,” says Jochen Halfar, an associate professor in UTM's Department of Chemical and Physical Sciences.

“We found the algal record shows a dramatic decrease in ice cover over the last 150 years.”

“It's the same principle as using rings to determine a tree's age and the levels of precipitation,” says Halfar.

“In addition to ring counting, we used radiocarbon dating to confirm the age of the algal layers.”

Radiocarbon dating compared the indications from the ring counting with evidence from magnesium in the algae, which is dependent on both the light reaching the algae and the temperature of the sea water.

Longer periods of open and warm water result in a higher amount of algal magnesium.

“In the north, there is nothing in the shallow oceans that tells us about climate, water temperature or sea ice coverage on an annual basis,” says Halfar.

“These algae, which live over a thousand years, can now provide us with that information.”

The Canadian university has put up the following video to further demonstrate their exciting finding.