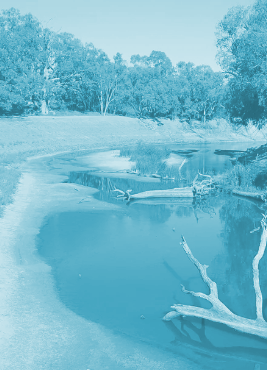 A prehistoric lake has provided a long-term record of floods and flows on the Murray Darling River.

Scientists have published important findings revealing that between 5,000 and 8,000 years ago when sea-levels were approximately two metres higher than today, the Lower Murray River turned into a large, lake-like body of water.

The geological investigation looked at samples of the sediment deposited within the area that would have formed the pre-historic lake, and found what could be an invaluable long-term record of events.

“Scientists are working hard to forecast what environments such as rivers and estuaries around the world would look like under a future scenario with higher sea levels and, in Australia, more intense droughts and floods,” says Dr Hannah Power from the University of Newcastle.

“One way to do this is to look back to a period 5,000 to 8,000 years ago, known as the Holocene Highstand, when sea levels were higher than they are today and examine what sort of paleoenvironments were present.

“What we have discovered has the potential to provide an in-depth climate history for the Murray Darling Basin over the last 8,000 years.”

As Australia’s most politically and economically significant river basin, the Murray Darling Basin drains more than one million square kilometres of the country, approximately 14 per cent of mainland Australia, covering four states and the ACT.

To understand what this environment looks like, the team used a combination of high resolution 3D computer modelling and analysis of a 30-metre-long sediment core collected from within the Lower Murray Gorge on reclaimed farmland (between Wellington and Blanchetown in the Riverlands and Murray Lands of South Australia).

The team was able to compare the historic and modern-day water depths and extents in the Lower Murray River and examples of the layering in the sediments collected from the historic lake, showing how the system recorded climate signals.

The lake, named ‘Palaeolake Mannum’, would have stretched from Wellington and the modern-day Lake Alexandria to at least Walker Flat, a distance of 240 kilometres from the mouth of the Murray and perhaps even further upstream.

The Lower Murray River’s ability to trap sediment transported through the Murray Darling Basin means it provides a record of floods and droughts in the Basin, as different types and volumes of sediment are deposited during different flow regimes.

“These sediments are very finely layered, and other work we have done shows that each individual layer probably represents individual flood events on the Murray and the Darling Rivers, as well as the annual river flow-peak generated by the yearly melting of the snow-pack that accumulates on the ‘Australian Alps’ around Mt Kosciuszko in NSW and Mt Bogong in Victoria,” says Associate Professor Thomas Hubble from the University of Sydney.

As sea levels decreased to modern levels over the last 5,000 years, the lake slowly drained. As it turned back into a river it started to cut down into the sediments that were laid down during the time of Paleolake Mannum, eroding into the finely layered sediment.

“This makes the modern Lower Murray River very different from most other modern rivers which typically have channels that deposit sediments rather than channels that cut away into layers of previously deposited material,” said PhD student Dr Anna Helfensdorfer, who led the investigation.

Throughout this time, the modern-day fringing swamps and floodplains formed, and Lakes Alexandria and Albert emerged as distinct lakes.

Associate Professor Hubble said the findings may allow the team to obtain a reliable, detailed and high-resolution climate history for Australia’s most important river basin.

“This is a key piece of knowledge to ensure we manage our biggest river basin as effectively as possible,” she said.