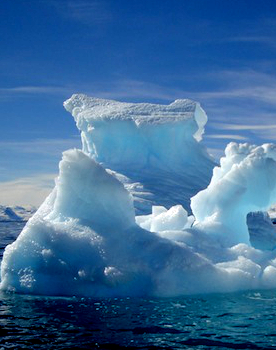 Melting ice from Antarctica could add up to half a metre to sea level rise this century.

The ‘Antarctica Factor’ is described as “the greatest risk, and also the greatest uncertainty, for sea levels around the globe”, according to researcher Dr Anders Levermann.

“While we saw about 19 centimetres of sea-level rise in the past 100 years, Antarctic ice loss could lead to up to 58 centimetres within this century.

“Coastal planning cannot merely rely on the best guess. It requires a risk analysis. Our study provides exactly that: The sea-level contribution of Antarctica is very likely not going to be more than 58 centimetres within this century.”

Sea-level rise due to ice loss in Antarctica , or the ‘Antarctica Factor’ adds to the risks posed by thermal expansion of ocean water under global warming and melting of mountain glaciers.

The range of sea-level rise estimates from the ‘Antarctica Factor’ provided by the scientists is fairly broad.

Assuming that humanity keeps on emitting greenhouse gases as before, the range the scientists call “very likely” to capture the future is between 6 and 58 centimetres for this century.

If greenhouse gas emissions were to be reduced rapidly, it is between 4 and 37 centimetres. Importantly, the difference between a scenario of business-as-usual and a scenario of emissions reductions becomes substantially greater on longer timescales, farther in the future.

In a new study, researchers accounted for a number of uncertainties in the computations, from the atmospheric warming response to carbon emissions to oceanic heat transport to the Southern Ocean.

Sixteen ice sheet modelling groups comprised of 36 researchers from 27 institutes contributed to the new study, which was coordinated by the Potsdam Institute of Climate Impact Research (PIK).

A similar study six years earlier had to rely on the output of only five ice sheet models. This development reflects the increasing importance of research on the Antarctic ice sheet.

“The more computer simulation models we use, all of them with slightly different dynamic representations of the Antarctic ice sheet, the wider the range of results that we yield – but also the more robust the insights that we gain,” says co-author Sophie Nowicki of the NASA Goddard Space Flight Center and lead author of the Intergovernmental Panel on Climate Change, who led the overarching ice sheet model intercomparison project, ISMIP6.

“There are still large uncertainties, but we are constantly improving our understanding of the largest ice sheet on Earth. Comparing model outputs is a forceful tool to provide society with the necessary information for rational decisions.

“What we know for certain is that not stopping to burn coal, oil and gas will drive up the risks for coastal metropolises from New York to Mumbai, Hamburg or Shanghai,” she said.