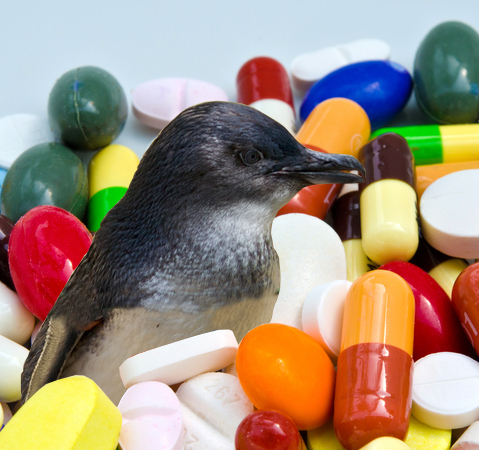 Antibiotic resistance genes are spreading to Australian wildlife, including captive sea lions and rock wallabies, and the little penguins of Sydney Harbour.

Resistance genes from bacteria in humans and domestic animals are being spread through the environment to the naturally occurring bacteria of many wild animals.
“Antibiotic resistance is one of the world’s most pressing health issues,” says Dr Michelle Power from Macquarie University.

“The spread of antibiotic resistance is commonly attributed to overuse of antibiotics in both human health and animal production.”

“It is worrying that we are seeing antibiotic resistance in bacteria of wild animals that have never been treated with antibiotics.”

One way the transfer of genetic resistance genes happens is through naturally-occurring mobile genetic elements called integrons, which were first discovered by Australian researchers in the late 1990s.

Integrons are able to pass genes between different species of bacteria, and can be spread through water, allowing antibiotic resistance to spread from land to marine environments. They are not deactivated by normal sewage treatment processes.

The research findings mean that if antibiotic resistance continues spreading into wildlife, antibiotic treatment of sick wild animals may not work as well.

Dr Power said there were wider implications of the findings too.

“We know that the normal bacterial flora of an animal can influence its growth, development, behaviour, and even mate selection,” she said.

“What we don’t know is what impact we are having on wildlife through the introduction of antibiotic resistance genes to their bacteria. We also need to be asking what else wildlife is picking up from human and domestic animals in terms of bacteria or other disease agents, and if that is hurting our efforts to conserve biodiversity,” she said.

Dr Power said her research was a great illustration of the One-Health concept – that the health of humans, domestic animals and wildlife is interconnected.

She said efforts to reduce the overuse of antibiotics in humans and domestic animals were important and must be continued.