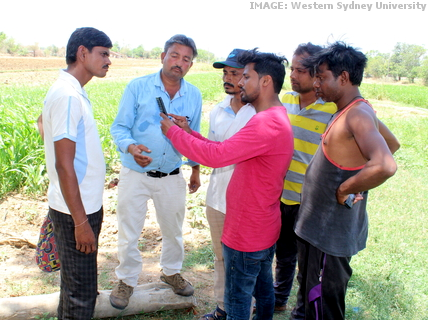 The MyWELL smartphone app is enabling Indian farmers to monitor and manage scarce groundwater in a distributed and localised way to monitor water levels in wells that supply drinking and irrigation water.

Experts estimate that by 2040, 21 Indian cities will run out of groundwater entirely and 40 per cent of the Indian population will have no access to drinking water.

Increasing use of industrial pumps to extract water from deep under the ground is slowly draining groundwater levels, meaning that water once available at 10-15 metre depth is now only available at 30 metres or even deeper.

Effectively, at many places in India water is hardly accessible for growing crops or domestic water needs.

“The MyWELL app supports the efforts of communities to be informed about the availability of local groundwater through the efforts of local, trusted volunteers called Bhujal Jankaars,” says scientist Professor Basant Maheshwari.

“These volunteers act as the intermediary between local people, organisations and governments in monitoring water levels though data collection in the MyWELL app,” he said.

Bhujal Jankaar Volunteers are trained to show local people how to measure water levels in wells with a wooden float and measuring tape and record these measures precisely in the app.

Over thousands of recordings, these measurements add up to create a detailed water data set that can be used to reduce the toll from drought and extreme heat.

“This technology can be readily used in other countries, developing or developed, to manage water supplies more effectively,” said Professor Maheshwari.

“By working alongside local people, building simple and repeatable skills, we can slow down the rate that water is taken out of the ground. These issues are common in many countries and that’s where we can readily extend the innovation to empower other communities to become more informed about the precious groundwater reserves.”

The app was developed at Western Sydney University, funded by the Australian Centre for International Agricultural Research (ACIAR) through the MARVI project (Managing Aquifer Recharge and Sustaining Groundwater Use through Village-level Intervention).

It can be downloaded from the Google Play store.