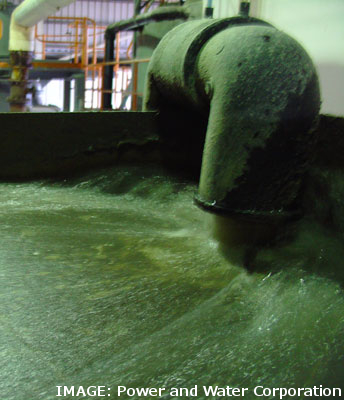 A large sewerage spill has reached a creek just kilometres from Darwin’s CBD.

Authorities are warning the public to stay clear of Ludmilla Creek as 260,000 litres of sewerage reaches the watercourse.

Fines could be on the way as Power and Water Corporation, the government-owned utility that runs the Ludmilla Wastewater Treatment Plant, fights to minimise the impact on creeks, banks, beaches and the sea.

The Northern Territory Environmental Protection Authority (EPA) said it was notified of a system failure at about 11:00am yesterday morning.

Power and Water said the discharge was stopped after about 45 minutes, and the treatment plant is operating as normal again.

EPA chairman Dr Bill Freeland warned the public to avoid Ludmilla Creek and its discharge areas, including the beach.

He said the Power and Water Corporation had moved quickly to establish water monitoring stations around affected areas, and the swift (though required) response would help them avoid prosecution.

The EPA has called on Power and Water to undertake a thorough investigation and give a solid explanation of what caused the spill, and how it will be avoided in the future.