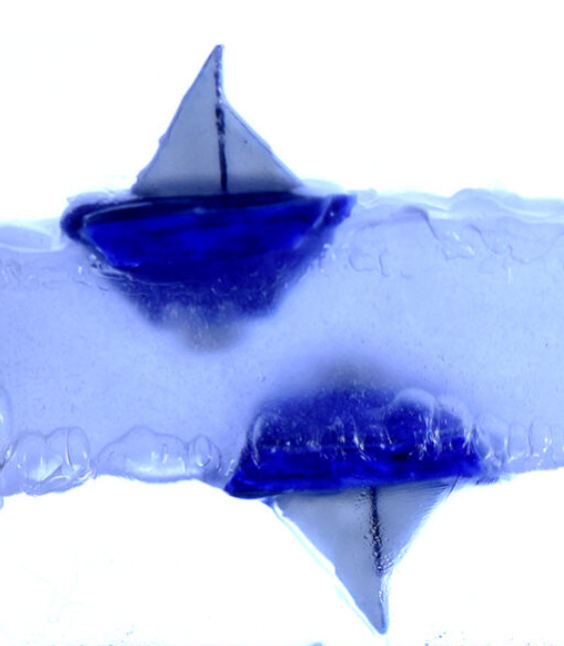 Scientists have managed to make a boat float upside down, underneath a layer of liquid.

In an experiment that seemingly inverts gravity, scientists in NZ have vibrated a layer of liquid in a container, allowing the liquid to float on a cushion of air, with a model boat floating on both the top and bottom surfaces.

Interestingly, the air bubbles in the lower half of the liquid layer sink rather than rise.

The researchers say the finding might have a practical use in transporting materials through fluids.

Under the action of gravity, liquids in a container typically fall to the bottom of the vessel. However, under certain circumstances, vibrating the liquid vertically can make it levitate above a less dense layer (such as a cushion of air).

Researcher Emmanuel Fort and colleagues reveal that this vertical shaking also causes buoyancy to flip at the lower surface of the levitated liquid — as if the gravity there has been inverted.

By shaking the vessels vertically and injecting air into the base of the system until the liquid starts levitating.

Objects, such as a model boat, are shown to float upside down on the lower interface of the levitating liquid.

The authors explain that the vertical vibrations are causing this apparent anti-gravity effect. Additionally, air bubbles in the lower regions of the liquid are also seen to sink rather than rise, a related anti-gravity effect that has been observed in previous experiments.

The observations defy Archimedes’ principle, in which an upward buoyant force, equal to the weight of displaced fluid, is exerted on an immersed body.

They show that this buoyancy force is mirrored on the lower interface of the levitating liquid layer, using boats that float on both the upper and lower layers of the liquid simultaneously.

However, this is more than just a nautical curiosity: such phenomena might have practical applications in the transport of gas or materials trapped in fluids.

More information is available in this scientific paper, and a demonstration can be seen below.