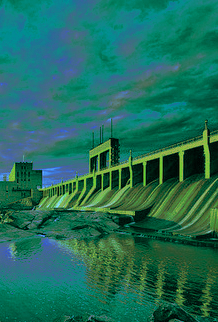 Some great Australiam minds have slammed the Abbott Government’s decision to scrap the once bipartisan-backed National Water Commission (set up by the Howard government), and cut COAG’s Standing Council on Environment and Water.

“The current federal government appears intent on trashing the Howard heritage and retreating from its leadership legacy on national land and water policy,” Dr John Williams, a founder of the Wentworth Group of Concerned Scientists, wrote in the Australian Water Association’s newsletter.

The latest he Bureau of Meteorology National Water Account shows Australia’s storage levels in populated regions have dropped from 93 per cent in June 2012, to 75 per cent a year later. They now sit at about 63 per cent capacity.

The drop is worse in the Murray-Darling Basin, one of the country’s fundamental supplies, where storage levels are down from 91 per cent two years ago to about 57.5 per cent now.

El Nino is coming too, which normally brings below-average rainfall for much of Australia, more falls in storage levels, less inflow and greater water use from farmers.

With these issues looming and more worries predicted as a result of future climate changes, scrapping the NWC and COAG Standing Council seems like a thoroughly retrogressive move to some scientists.

But the Federal Government says it maintains “a strong commitment to progressing water reform and we will continue to champion the principles of the National Water Initiative,” according to a spokesperson for senator Simon Birmingham, the Parliamentary Secretary in charge of water issues.

“There are a range of agencies who already do a lot of policy work in the water space and we anticipate some of the functions of the NWC may end up in the Department of Environment, some may end up in the Productivity Commission or some in ABARES,” the spokesperson told Fairfax Media.

Former science adviser to the Water Commission, Dr Richard Davis, says the Government is yet to detail “whether they’ll even continue the [Commission’s] responsibilities and who will be responsible for them”.

Dr Davis has advised against giving water industry oversight to the Environment Department, which has been raised as a potential option.

“You can hardly have the federal bureaucracy marking itself,” Dr Davis said, adding that the Department has undergone significant cuts as well.

“The government has signalled that some of the very important tasks currently undertaken by the NWC will be conducted by the [Environment] Department, undermining the independence of those assessments and audits,” the spokesperson said.

“Under the current proposal, the government will be assessing the effectiveness of its own water management strategies, which is unacceptable.”

Dr Davis added that El Nino and low storage are just the conformed issues on the horizon, and the threats posed by climate change are greater still.

“We’re living on borrowed time and we should be investing for what’s coming our way,” he said.

“We are moving into drier periods for southern Australia, especially the south-west and the south-east, with much less rainfall and much less runoff,

“We’re bound to run into more intense, bigger droughts in the near future, and it’s the wrong time to be dismantling the apparatus that served us well in the last drought,” he said.