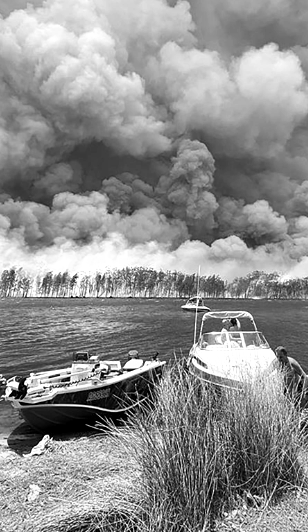 Scientists say ash and debris from bushfires could bring more fish deaths and algal blooms in the River Murray.

Over 200,000 hectares have been burned above the Hume Dam in New South Wales - the River Murray’s main store of water supply.

“What we get after a major fire event like this is sediment, ash and debris washing off the catchments into the waterways,” CSIRO microbiologist Gavin Rees has told reporters.

“This brings with it the potential to cause a fair bit of environmental damage or stress to the river systems.”

Dr Rees said fish deaths are “very likely where you've got a small body of water meandering its way through many kilometres of burnt-out forest”.

He also said ash and soil could deoxygenate parts of the river, creating the ideal environment for algae.

“[Bushfire] material can stimulate the microbes usually present in the river and they can start sucking up a lot of the oxygen in the water column,” he said.

“You can have large tracks of water where there's no oxygen.”

The Murray Darling Basin Authority (MDBA) says it is monitoring sediment from bushfires in the stream network in the Upper Murray catchment.

“We'll continue to monitor how the lake performs and whether those impacts are starting to move through the lake,” he said.

“But I certainly wouldn't expect that poor quality resulting from the bushfires to extend far beyond Hume Dam itself.”

The Commonwealth Environmental Water Holder, Jody Swirepik, has echoed the warnings. She says there is capacity to use environmental water to mitigate damage.

“The way we could respond is to actually order water to come in a particular pattern that we think will mitigate the water quality problems,” Ms Swirepik said.

“We could alter the flow pattern to be able to provide some relief to any water quality issues.”