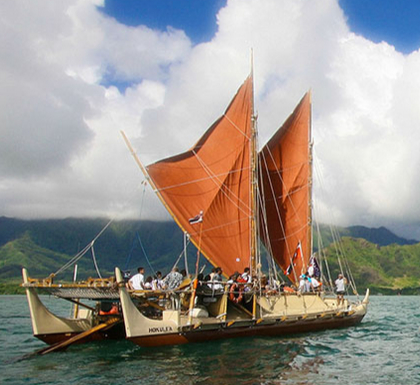 The Hokule'a canoe has made it to Australia, a third of the way into its three-year journey to draw attention to the dire state of our oceans.

The canoe crew is on a 75,000-kilometre journey to advocate for the health of the oceans, on board a 19-metre boat built with traditional methods.

Captain Kalepa Baybayan says they navigate using only visual clues from the natural environment, though they do have a GPS unit on board.

“The daytime star [is] the sun, the night-time star is the moon, the planets, the winds and the direction of the sea,” Mr Baybayan told the ABC.

Since leaving Hawaii last year, Hokule'a has been to the Cook Islands, Tonga, Rarotonga, Samoa, Tahiti and New Zealand.

It has now left the Queensland city of Townsville for Cairns, and will then head north to Cooktown and the Torres Strait, over to Darwin, and onto Bali.

Apprentice navigator Haunani Kane says the canoe brings together traditional practices with new technology to achieve its goal of getting the world to “care for island Earth”.

“We have created a network of researchers and scientists, especially back home, that have helped us design a series of experiments to help us monitor the health of the oceans that we travel through,” she said.

“Some of the projects ... are [looking at] water quality, as well as looking at the gut contents of each of the fish that the crew catches and eats — seeing if there's any plastic in there [and] getting a better idea of what these pelagic fish are eating — as well as collecting fin simples for genetics.”

Throughout the three-year journey, 350 people hop on and off at various locations around the world.

The crew has been joined in Cairns by an Aboriginal ranger and marine biologist.

Polynesian Voyaging Society president Nainoa Thompson told reporters that including Indigenous people and getting proper permission to enter their country is central to the values of the expedition.

“They become our teacher and they allow us to be invited into the community, so bringing those individuals on ... to be crew members on the canoe is a crucial part of our learning process,” he said.

“The journey to their place is all about learning, so by the time we land we hope we're prepared to make sure that we are respecting the places that we go to.”

Anyone can track Hokule'a's journey on the Polynesian Voyaging Society's website.