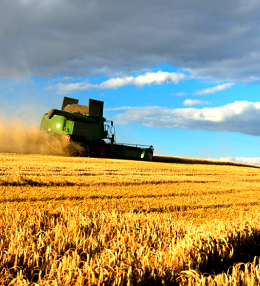 University of Southern Queensland (USQ) researcher Dr Saman Seneweera says that as CO2 levels continue to rise over the next 40 years, vital crops will be impacted.

“A large share of the global population depends on cereal crops as their primary dietary source of zinc and iron,” he said

“Dietary deficiencies of these nutrients are a substantial global public health problem.

“We have found that certain crops have lower concentrations of zinc and iron when grown under field conditions at the elevated atmospheric CO2 concentration predicted for the middle of this century,” he said

“As a plant physiologist, my research concentrated on understanding how the mechanisms of rising CO2 concentration reduces the uptake of these nutrients in plants.”

Dr Seneweera was one of twenty researchers in an international collaboration instigated by the Harvard School of Public Health (HSPH) in the US.

The study was focused on whether rising levels of atmospheric CO2 threatens human nutrition by analysing data from 41 cultivars (genotypes) of grains and legumes belonging to the C3 and C4 functional groups (plants that use C3 and C4 carbon fixation pathway) from seven different locations in Japan, Australia, and the United States.

According to the study, an estimated 2-3 billion people around the world receive 70 per cent or more of their dietary zinc and/or iron from C3 crops.

“We have published a joint paper establishing that CO2 has a huge impact on the nutrient content of cereals, but now it’s time to take the work forward,” he said.

“I want to take this understanding to incorporate processes into the next generation of plant breeding programs and other genetic technology to increase nutrient content by which decreased sensitivity to rising atmospheric CO2 concentration.”

The investigations will continue.