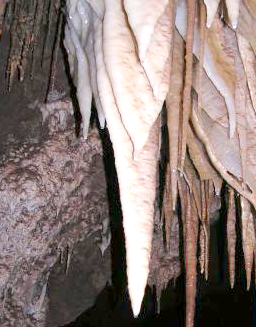 In a world bathed in perpetual darkness, a recent study has found tiny communities bursting with vitality.

In Arizona’s Kartchner Caverns, a limestone cave system hidden beneath the state’s hilly grasslands an unexpected diversity of microorganisms, rivalling the size of surface-dwelling microbial communities, has been discovered.

It shows once again that microbes really can find a way to live and prosper in conditions which are totally inhospitable to other lifeforms.

The finding is not exciting for the new species it has uncovered, but also for future studies and projects ranging from environmental cleanup solutions to drug development.

The recent study by the University of Arizona took swabs of stalactites and other cave formations for DNA analysis. From the genes they found in their samples, researchers reconstructed the bacteria and archaea (single-celled organisms which lack a cell nucleus) living in the cave.

“We didn't expect to find such a thriving ecosystem feasting on the scraps dripping in from the world above,” said research scientist Julie Neilson.

“What is most interesting is that what we found mirrors the desert above: an extreme environment starved for nutrients, yet flourishing with organisms that have adapted in very unique ways to this type of habitat.”

“We discovered all the major players that make up a typical ecosystem... from producers to consumers, they're all there, just not visible to the naked eye.”

The sad allegory of the cave-dweller is that it is not physically enlightened enough to photosynthesise.

In their dark and brooding world, bacteria live off water dripping into the cave through cracks in the rocks above.

The team discovered the organisms can harvest the energy locked in compounds leaching down from decaying organic matter in the soils above as well as minerals dissolved within the rock fissures.

“The cave microbes make a living off the extremely limited nutrients that are available,” Neilson said.

“Instead of relying on organic carbon, which is a very scarce resource in the cave, they use the energy in nitrogen-containing compounds like ammonia and nitrite to convert carbon dioxide from the air into biomass.”

In fact, the researchers found evidence of all known mechanisms for organisms to obtain carbon for food.

The nitrogen-driven pathway to carbon is probably most common approach in the cave, but some micro-bugs even engage in the consumption of rocks – munching boulders to derive energy from chemical compounds such as manganese or pyrite.

“Twenty percent of the bacteria whose presence we inferred based on the DNA sequences were not similar enough to anything in the database for us to be able to identify them,” Neilson said.

“On one stalactite, we found a rare organism in a microbial group called SBR1093 that comprised about 10 percent of the population on that stalactite, but it represented less than 0.5 percent of the microbes on any of the others.”

A sewage treatment plant in Brisbane is one of just three other places where that specific kind of organism has been found before.

“This suggests there are many microbes out there in the world that we know almost nothing about,” she said.

“The fact that these organisms showed up in contaminated soil could mean they might have potential for applications such as environmental remediation.

“The most abundant microbe that we found in our taxonomic survey was closely related to a microbe that produces erythromycin, an antibiotic. That is not what it is doing in the cave, but it shows you that not only is there a potential to find microbes that are new to science, but studying them in those extreme and poorly studied environments could lead to new applications.”

With new proof that life really can thrive anywhere, the study’s principal investigator Professor Raina Maier says; “when you think about exploring Mars, for example, and you look at all those clever strategies that microbes have evolved and tweaked over the past 4 billion years, I wouldn't be surprised if we found them elsewhere if we just keep looking.”

More information is available in the study published by the journal Nature.