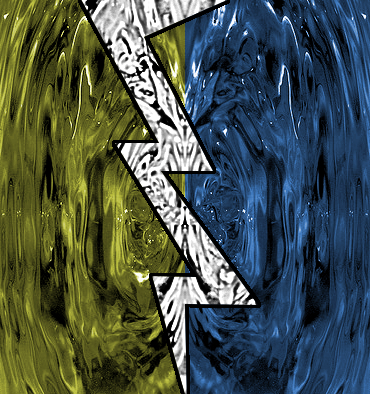 As populations grow and the planet dries, the need for safe, potable water will only continue to expand.

It is clear that high-tech solutions will be required to keep the growing human population from thirst, and engineers from MIT may have come up with an important new piece of that puzzle.

The MIT team has unveiled an innovative approach to desalination that does not use any filters, and should be cheap and easy to produce at a large scale.

The advantage of going without filters is that the device is less likely to become clogged.

The new design also does not requiring any boiling, which consumes great amounts of energy.

Instead, the system uses an electrically-driven shockwave within a stream of flowing water, which pushes salty water to one side of the flow and fresh water to the other, easily separating the two streams.

This approach is “a fundamentally new and different separation system,” says MIT professor of chemical engineering and mathematics, Martin Bazant.

Unlike most other approaches to desalination or water purification, this one performs a “membraneless separation” of ions and particles.

The process, called ‘shock electrodialysis’, pushes water through a porous material - in this case, made of tiny glass particles, called a 'frit' - with membranes or electrodes sandwiching the porous material on each side.

An electric current is applied to the system, causing the salty water to divide into regions where the salt concentration is either depleted or enriched.

When that current is increased to a certain point, it generates a shockwave between these two zones, sharply dividing the streams and allowing the fresh and salty regions to be separated by a simple physical barrier at the centre of the flow.

Even though the system can use membranes on each side of the porous material, Bazant explains, the water flows across those membranes, not through them.

That means they are not as vulnerable to 'fouling' - a buildup of filtered material - or to degradation due to water pressure, as happens with conventional membrane-based desalination, including conventional electrodialysis.

The system allows for a continuous flow of water through cheap porous media, which is relatively easy to scale up for desalination or water purification.

One immediate application would be in cleaning the vast amounts of wastewater generated by hydraulic fracturing, or fracking.

This contaminated water tends to be salty, sometimes with trace amounts of toxic ions, so finding a practical and inexpensive way of cleaning it would be highly desirable.

The system not only removes salt, but also a wide variety of other contaminants — and because of the electrical current passing through, it could be tuned to sterilise the stream as well.

Unlike some other approaches to desalination, this one requires little infrastructure, so it might be useful for portable systems for use in remote locations, or for emergencies where water supplies are disrupted by storms or earthquakes.

The new approach is described in the journal Environmental Science and Technology Letters.