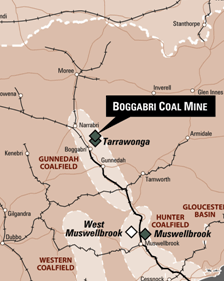 The Environment Protection Authority has issued a $3,000 slap on the wrist to a coal company whose slag pile seeped into a New South Wales river.

The EPA has fined Boggabri Coal, a subsidiary of Japanese petroleum firm Idemitsu, after rain caused one of four large stockpiles of excavated material to enter a tributary of the Namoi River.

EPA Northern Region Director Gary Davey said Boggabri Coal failed to meet its requirements for installing sediment and erosion controls, but did work well with the EPA when it was caught out.

The EPA reportedly found no immediate environmental harm was caused by the spill, but fined the miner $3,000 over concerns of the potential for negative effects in the future.

The small fee will hardly make a mark on the profits from the company’s four mines across New South Wales, but they have been noted for all to see on the EPA's Public Register.

“In August, the EPA became aware of the issue and conducted a full investigation. Boggabri Coal cooperated fully with the EPA,” Mr Davey said in an official statement.

“The EPA is pleased to note that the company has since put in place measures to prevent further pollution. These measures include the installation of more sediment and erosion controls, and reducing the size of the stockpiles.”

“Boggabri Coal has an obligation to limit any environmental impacts from their mining activities.”