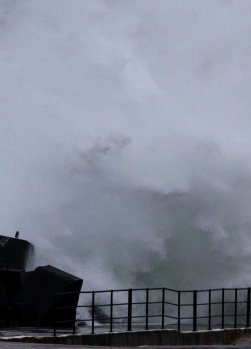 Half of NSW’s coastal community thinks rising sea levels will not impact them directly, a new survey finds.

The study by UNSW scientists found that not only are most unconcerned about sea rise, but 25 per cent of accommodation businesses close to the coast do not know if sea level rise is even occurring.

“Our coastline is changing. Many locations along the NSW coast are seeing amenity loss and infrastructure damage associated with erosion and inundation – that is, the flooding of normally dry land by sea water, often caused by storms surges or king tides,” says UNSW’s Professor Rob Brander.

“These storm events will continue in the future. Combined with anticipated sea level rise, they’ll only enhance the extent and cost of coastal erosion damage and lead to greater inundation of coastal zones throughout NSW in the future, particularly in low-lying estuarine areas.”

The researchers say people’s understanding and perception of storms and sea level rise, and their associated impacts of erosion and inundation, can significantly influence how and whether they engage in coastal adaptation actions – often influencing the success or failure of those actions.

“That’s why we wanted to find out what coastal communities understand and perceive about these hazards and how these hazards will affect their interactions with, and use of, the coast in the future,” says study author Anna Attard from UNSW Science.

“We think that’s an important aspect of building community resiliency and preparedness to coastal erosion and inundation.”

The My Coast NSW Study surveyed over 1,000 people from along the NSW coast, including government workers, academics, researchers, engineers, people who use the NSW coast recreationally, and coastal accommodation business owners and managers.

“Our ultimate goal is to help improve the ability of NSW coastal communities to adapt sustainably to the risk of coastal erosion and inundation,” Ms Attard says.

Lack of community knowledge about the direct impact of sea level rise is one of the key aspects of the report – which the authors say is concerning, given that sea level rise is a key factor driving coastal erosion and inundation.

“We found that only about 50 per cent of general coastal users think that sea level rise will impact them directly – that’s a worry, given that estimates suggest that by 2100, sea level rise could increase by a metre or more if greenhouse gas emissions continue unchanged,” Ms Attard says.

“Even more worryingly, 25 per cent of coastal accommodation businesses don’t know or are unsure if sea levels are even rising at all.”

The study was released on the anniversary of the 2016 East Coast Low ‘superstorm’ that saw widespread damage along Australia’s east coast.

“Forty-five per cent of the general coastal users we surveyed think storms like the one in 2016 occur only every 20 years, so they think it’s rarer than what’s actually happening. But over the last decade or so, we’ve actually had a few major storms in NSW – in 2016, 2015 and 2007, at least,” Ms Attard says.

The report also found a clear disconnect between what coastal management professionals think the public should know about coastal hazards, and what the public flagged as wanting to know more about.

“General coastal users told us that would like to know more about how climate change will impact their immediate coast, what the possible solutions are and who the ‘key players’ of coastal management are,” says Ms Attard.

“Community engagement needs to be a two-way process to address that disconnect.”