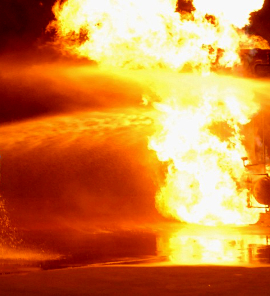 The inquiry into conditions at Victoria’s Fiskville Country Fire Authority (CFA) training base has heard that water was deliberately contaminated as part of a biological experiment.

The Victorian parliamentary inquiry has heard allegations that the potentially dangerous and fire-retarding organism, pseudomonas aeruginosa, was added to water at the base as a cheap way to treat hydrocarbons.

It is the same bacteria that oil company Exxon Valdez used as part of its cleanup measures following a spill in Alaska in 1989.

Metropolitan Fire Brigade firefighter Mick Tisbury told the inquiry that operators of the CFA centre were using the bacteria as early as 1988.

Mr Tisbury said he met a scientist who had told him “that he was part of an experiment with the CFA where they deliberately introduced pseudomonas aeruginosa into the water supply as a biological way of cleaning up the hydrocarbons in the water”.

Mr Tisbury, a former instructor at Fiskville, said a series of independent reports, some of which were commissioned by the CFA, revealed the contamination to the authorities as early as 1988.

He also pointed to a 2007 report showing dangerous levels of pseudomonas aeruginosa in one of Fiskville's dams.

“The presence of pseudomonas aeruginosa at these levels indicates the water is unsuitable for primary contact,” the report allegedly said.

Mr Tisbury accused the CFA of knowingly risking the health of recruits.

“If you do bugger up and do expose your people to it, tell your people what you've done. Don't cover this up,” he said.

“As an instructor I am very concerned that I have unknowingly subjected recruits to train in, and with, contaminated water.”

Mr Martin said told the hearing that the promotion was a reward for Mr Justin’s adherence to a culture of silence.

Mr Justin emailed Fiskville staff in 2012, telling them that the water posed no risk to health.

Mr Martin said the water was green and foul-smelling.

“He told me a lot of untruths, he put us all at risk,” Mr Martin said.

Mr Martin said has asked Mr Justin to help him increase health standards by keeping dirty equipment away from eating areas, but these requests were refused.

“A lot of things we asked for...he was reluctant to listen to. It appeared, certainly to me, that he was doing things totally different to character, things he would usually do. And it appeared to me he was doing this to get up in the organisation,” Mr Martin said.

“I'm in no doubt that they knew and didn't tell.”

The CFA closed the Fiskville training facility in March this year.

Initial reports on the inquiry should be tabled in Parliament later this month.

Officials from the CFA and Victoria’s Environment Protection Authority will give evidence in the second stage of the inquiry.