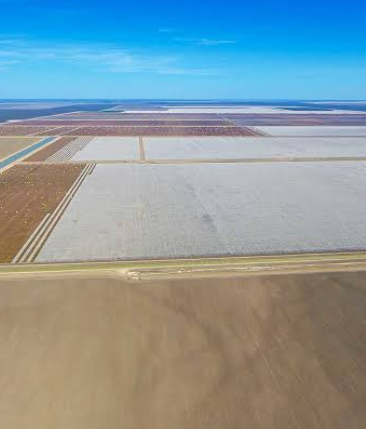 Queensland’s Cubbie Station has opened its gates to Murray-Darling Basin councils in an attempt to improve its damaged reputation.

Australia's largest cotton farm has been under pressure in recent years over its water use and impacts downstream.

Cubbie CEO Paul Brimblecombe said he wanted councillors to see the station and the drought for themselves.

“It was a fantastic opportunity to get out on the ground and put the full story in front of them,” he said.

“There was a whole bunch of facts and figures presented [on the tour] and a lot of frank conversations, which was very worthwhile.

“[And it's good to] understand the opinions that are out there.”

The tour was part of the National Murray-Darling Association Conference, which saw about 20 councillors and mayors from the conference travel to Dirranbandi to take part in the bus tour.

Delegates toured the 80,000-hectare property, stopping at dams with a combined capacity of 460 gigalitres.

“There's plenty of commentary around the fact that there has to be water out there on Cubbie, but I mean as you've seen today, you've driven around the whole operation and there's no water here on farm and there hasn't been for a couple of years,” Mr Brimblecombe said.

Andrew Tilley from the Murray-Darling Association took part in the tour.

“There's no water here and there hasn't been water here for a long time,” he said.

“I don't want to be seen as a supporter of cotton or Cubbie but I just wanted to know the honesty of the situation and there's no water here.”

Broken Hill councillor Marion Browne said she wanted to see Cubbie for herself after large-scale fish kills in the Darling River near Menindee Lakes earlier this year, just south of her community.

“There's a lot of hostility towards Cubbie Station where I come from in Broken Hill, so I thought it was really important to come and see what the reality is and what Cubbie Station is actually doing,” she said.

“[The tour has changed my mind] yes, I have been impressed with the level of science that has been applied.

“Also the ingenuity in making use of this particular land that they are on.”

“But I think it's changed my views somewhat as to the relative importance of the drought. It really hits home when you see this huge area with all their expertise without a drop of water.”