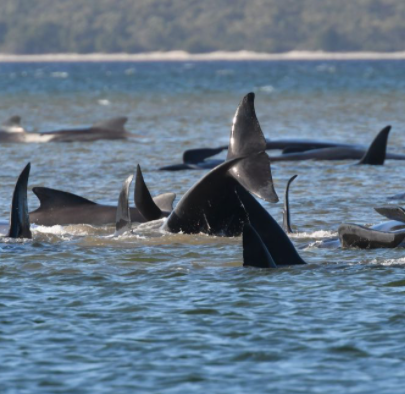 Hundreds of whales appear to have died in a mass-stranding off Tasmania.

More than 450 whales are now believed to be stranded in waters off Tasmania’s west.

Earlier this week, rescuers discovered 200 whales about 10km away in the same harbour, which all appear to be dead.

The total number of dead long-finned pilot whales in the stranding is believed to be about 290.

The Tasmanian government’s Marine Conservation Program is leading a team of about 60 rescuers in an area called Fraser Flats, near the town of Strahan.

About 25 whales were pulled by boat from sandbanks to open waters on Tuesday, before two returned to the main stranded pod.

Helicopters then spotted a new group of 200 whales in two bays between 7km to 10km south of the main rescue site.

“From the air, most appear to be dead,” said Nic Deka, the coordinator of the rescue.

“The water is a very dark tannin colour and maybe they stranded and then washed back into the bay. From the air they did not look to be in any condition for rescue.”

“We would still have focused our efforts on Fraser Flats because they are the ones with the best chance of survival.”

The experts are now faced with the task of disposing of the deceased whales.

“We do know we can’t leave them in the harbour because they will present a range of issues. We are committed to retrieving and disposing,” Deka said.

Dozens of government staff and 20 volunteers, many from the fish farming industry, are chest-deep in water, manoeuvring webbing under the whales to lift them off the sandbank.

Rescued whales have tags attached to monitor them. Unfortunately in this case, pilot whales are very social, so they need to be taken a long way from the main group, otherwise they will turn around and go back.

Dr Carylon says it is a natural phenomenon.

“There’s nothing to indicate that this [stranding] is human caused. This is a natural event and we know strandings have occurred before and we know that from the fossil record,” he said.

“As far as being able to prevent this occurring, there’s little we can do.”