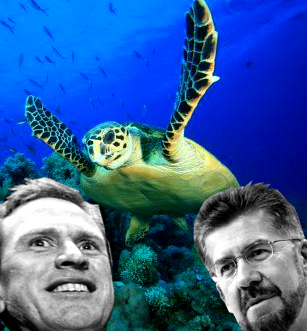 Two members of the Great Barrier Reef Marine Park Authority board have been cleared from conflict of interest accusations, after approval for dredge dumping was given by men with links to mining companies.

Also, new questions are being asked about the assessments prior to the approval of the large-scale infrastructure development.

Claims were aired last year alleging that former Mayor of Townsville, Tony Mooney and Director-General of the Queensland Premier’s Department, Jon Grayson both held interests in companies which would benefit from the expansion of the Abbott Point Coal Port terminal.

Mr Mooney is now an executive for mineral exploration firm Guildford Coal, while Mr Grayson is the state’s chief public servant and holds shares in an gas firm.

Federal Environment Minister Greg Hunt ordered an inquiry in the potential conflict of interests. It was conducted by legal expert Robert Cornall, who found that the allegations were unsubstantiated, as both men appropriately disclosed their financial and personal interests.

Both board members were at the crucial Great Barrier Reef Marine Park Authority meeting last year which rejected advice from its own scientists that port development in such sensitive areas has the “potential to degrade inshore diversity”. After the meeting, GBRMPA issued a statement saying the risk should be a “key consideration” in port approvals, but did not halt progress on the mining infrastructure development.

The government report on the two board members found that as Mr Mooney is employed by a company that does not actually export coal, his interest are not in conflict. Mr Grayson was cleared after it was deemed his private investments did not interfere with his public position.

The dredging activities required to expand the Abbot Point coal port will lead to the dumping of millions of tonnes of silt and spoil in potentially dangerous proximity to the Great Barrier Reef.

It has also emerged that the state and federal Environment Departments undertook no independent assessments of the risk of various dredge spoil dumping scenarios, including disposal on land.

Instead, Federal Environment Department compliance officer Dean Knudson has told Senate estimates that approval was given based on the costing submitted by the North Queensland Bulk Ports Corporation - government-owned corporation seeking to expand the port.

The initial report from North Queensland Bulk Ports found that dumping 3 million cubic metres of spoil on land would be too expensive.

Mr Knudson said taking the corporation at is word was “consistent with the world heritage convention recommendations” and that “there was a world’s best practice environmental assessment undertaken for this port”.

“The proponents could well be overstating the cost of disposing of dredge spoil on land but the government doesn’t know,” Ms Waters said

“It’s simply relying on the proponent’s word, even though the proponent obviously has a direct conflict of interest.

“The community will be shocked to hear that our government is blindly relying on port developers’ claims and letting them dump dredge spoil offshore in the reef’s waters,” she said.