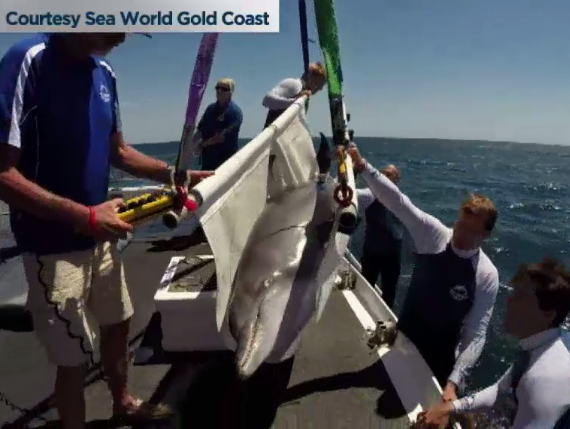 Authorities have freed a dolphin that learned how to feed from Queensland’s floating drum lines.

The pregnant bottlenose dolphin has been released back into waters off the Gold Coast after getting hooked on the weekend, and spending the past few days in the care of Sea World staff.

The 25-to-30-year-old mammal was hooked while trying to steal food from baited drumlins, set up as an anti-shark measure.

“If we look at her teeth, she's been stealing baits for some time because they've been heavily worn down from the anchor,” said Sea World marine sciences director Trevor Long told the ABC.

“I'd say what she does is she rubs her mouth on the anchor chain and then works it towards the hook and steals the bait.

“Hopefully she's learned her lesson because we wouldn't like her to teach whatever she has the same behaviour so that's always a problem for us.”

The dolphin and her calf are expected to make a full recovery.

“The hook was deeply embedded in the lower jaw so we had to bring the dolphin back to the Sea World vet centre where the hook was surgically removed,” Mr Long said.

“There's no infection there, the mouth has healed up exceptionally well in that short time.

“She's got a long-acting antibiotic injection in her so we feel strongly that her and the calf should survive.”