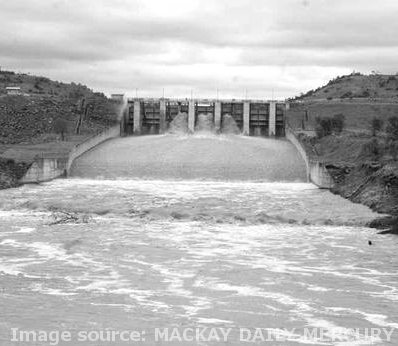 An experienced engineer has poked some serious holes in the Queensland Government’s review of SunWater’s operation of the Callide Dam.

The Palaszczuk government ordered an investigation into SunWater’s response to floodwaters spurred by Cyclone Marcia in late February this year.

Hundreds of homes were destroyed and thousands of people displaced in central Queensland, with many residents blaming the automatic release of water from the Callide Dam for the severe flood damage.

Inspector-general of emergency management (IGEM), Iain Mackenzie, handed down his findings in July, claiming that “regardless of how the Callide Dam was operated during the event, the communities along the Callide Valley would still have experienced a major flood”.

The IGEM’s report said that a hydrological review confirmed that SunWater's Emergency Action Plan (EAP) was followed, but that the forecasting tools that SunWater used were inadequate.

It found that the chance of the dam gates automatically opening could have been predicted earlier, if the storage estimates had been more accurate, or better modelled.

But engineer Ken Pearce – an authority with over 30 years’ experience in all Queensland water infrastructure matters – says the IGEM missed many key aspects in his review.

“The IGEM however failed to address key issues and simply based his conclusion on flawed modelling by a consulting hydrologist,” Mr Pearce wrote in his review, which has been submitted to the Queensland Government.

Mr Pearce says SunWater has acknowledged that the opening of the gates on Callide Dam would produce a considerable flood wave in Callide Creek, followed by a second surge when the automatic gates opened, which when the waters were about five times the bank full capacity of the Creek.

“This is not normal flood water,” Pearce said.

“By SunWater’s own admission this huge surge of water could travel at a speed of three metres per second. A surge of that magnitude travelling at that speed would undoubtedly cause considerable devastation in the Valley, much like a tsunami.”

“The IGEM was required to investigate the surge produced by SunWater’s operation of the facility and identify the implications for the downstream community. He simply did not do this.

“Had he done so, he would have realised that the facility could have been operated in a way that would have met SunWater’s requirement for water without affecting downstream property owners.”

Mr Pearce argues that discharge from the Dam could have been confined within the bed and banks of the watercourse, but instead the actions taken (filling the dam first and then releasing full inflow) maximised the implications for downstream property owners.

“SunWater may consider that the practice minimises its cost and its risk of not meeting its water requirements... [but the] Government may see the situation differently to SunWater if it is ultimately forced to wear the cost to downstream property owners,” he said.

He said the hydrology consultant made a range of inappropriate assumptions and calculations, and made no attempt to model the base case that would allow proper consideration of the flooding response.

“The base case for operational considerations is the dam in place with the gates being operated on the basis of ‘industry best practice’,” Mr Pearce said.

“Without modelling the base case, the IGEM is not able to consider the implications of suboptimal gate operation.”

He said “the adopted approach is risky given the lack of data, the use of calculated data, the uncertainty, and the time and financial limitations”.

“The consultant’s work warrants review - in particular the calculated hydrographs in view of an apparent inconsistency in the Flood Operations Manual.

Mr Pearce said that the IGEM had committed to engage with the public, but his process lacked transparency.

“SunWater and the IGEM refused to provide information and failed to respond to requests for information... The lack of information is a very serious impediment to getting a good outcome,” he said.

“SunWater has been more secretive than Seqwater was with operating arrangements at Wivenhoe Dam.”

“The IGEM said that the review would focus on ‘getting to the facts’. He has clearly failed in this regard.

“The facts of the matter are still very much in dispute. Not only has he not identified the facts that are not in dispute; he has not summarised the arguments and presented his findings for those that are in dispute. He has also relied on the findings of a consultant. This practice is inappropriate,” Mr Pearce contends.

He said prudence would dictate that the IGEM should have at least done the following;

“The IGEM simply did not do any of this,” Mr Pearce said.

The full letter - including the basis for the argument that the modelling was flawed, as well as tips for improving the response next time - has been sent to Queensland’s Environment Department.