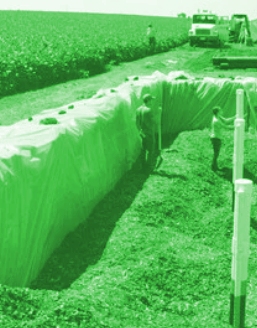 Six bioreactors are being built around the far northern towns of Tully and Innisfail under the Wet Tropics Major Integrated Project.

The $15-million Queensland Government project involves digging 10-metre trenches between sugarcane paddocks to trap water running from the field, funnelling it to a drain where it will slowly filter through woodchips.

Inside the woodchips, bacteria strip the run-off of any nitrates.

Bioreactor expert Mark Bayley from Australian Wetland Consulting says the invention is based on natural processes.

“It's a carbon-rich, oxygen-poor environment — essentially it will be like a giant peaty swamp,” he said.

“The bacteria, bugs that you can't see, they're using the nitrate as food, [this] is the simplest way to describe it.

“Nitrogen gas will then seep up through the reactor and into the atmosphere.

Scientific reports have shown nitrogen can make its way to the Coral Sea, but there is still uncertainty about the actual amounts leaving from paddocks.

“We just don't have a good handle on how much nitrate is in there when it comes off the paddocks, if it comes off in large volumes,” Mr Bayley said.

“This project is about the bioreactor and how well it works, but it's also about really understanding how nitrate moves off the paddocks.”

Some farmer tired of being blamed for ocean ecosystem damage have welcomed the trials, which they see as a chance to prove they are not the only source.

The first information on the bioreactors' efficacy and nitrate levels should be available in 12 months' time.