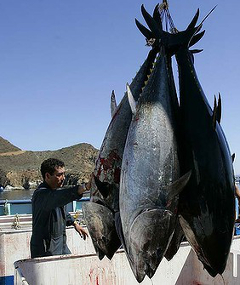 Tuna fishing zones in the Western and Central Pacific are being slammed by international fleets seeking the swimming gold.

So many ships are operating in the areas that local fishers from Pacific islands are struggling to catch anything in their own aquatic backyard.

Workers in the island nations have seen their job prospects decimated by the influx of foreign fishing boats, which pay fees to governments for the rights to a chunk of the $7 billion industry.

“Their fuel is subsidised, their boat building fees are subsidised by their governments, that's an unfair advantage as they come here to Fiji with the local boats that don't have fuel subsidies,” said Robert Matau, from the Suva-based Islands Business magazine.

“They have 35 boats and there are only 5 boats operating because there is not enough fish.

“Their tuna catch has dropped and it's not viable enough for them to continue fishing in Fiji anymore.”

Hundreds of massive and advanced Chinese ships have been operating in the Pacific in recent years, after the government poured funds into state subsidies for the industry.

Greenpeace representative Nathaniel Pelle says Pacific nations get just a pittance of the earnings taken overseas by the international fleets.

“In the long term there is no benefit of having this system of reliance on selling access to foreign vessels, the economic benefit is going to come from having a stable fishing population,” he said.

“We're talking Fiji, Solomon islands, Vanuatu, Tonga, these countries have been trying and having some success in recent years to develop their own fisheries... with the influx of especially Chinese longliners with heavy fuel subsidies, these guys just can't compete.”

Recent agreement have led to a ban on purse seine (dragnet) fishing in the region, but the long lines running behind the current vessels are just as indiscriminate with their catches.

Some authorities have suggested further bans to reduce the industry to ‘line and pole’ methods of fishing, which would maximise the abilities of smaller-scale local operations and reduce the amount of collateral marine destruction.

“[With a] pole and line you catch one fish at a time, you can be much more selective of what you catch whereas purse seine catches everything that's in the net turtles, sharks, rays and tuna,” Safcol Australia's CEO Andrew Mitchell said.

Safcol tries to buy its tuna from fisheries where pole and line fishing is well-established, such as the Maldives and Indonesia.

“It's certainly fantastic for the local communities because you obviously need more people to catch the fish and its more localised and that's a trend that they should tap into,” he said.

“And believe me there is no question that there will come a time when the majority of canned tuna bought in Australia will be either pole and line or fad free and not purse seine as we're currently seeing.”

“They had an established pole and line fishery that declined over the years but now with increase in demand from the West we're seeing Solomon Island based tuna companies are buying more pole and line vessels,” Mr Pelle said.

“There certainly is hope that the Pacific can turn it around and transform their fisheries but they need to stand up to the distant water fleets.”