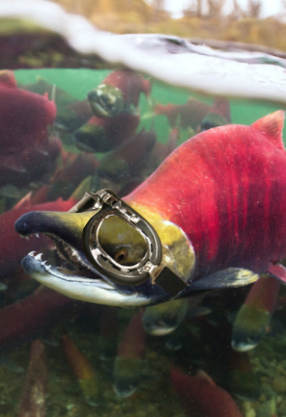 Fish gun, salmon cannon, call it what you will, a video of fish being flung through a tube has captivated millions this week.

US bioengineering firm Whooshh Innovations is using an innovative new method to transport salmon from one estuary to another, via a giant overland pneumatic tube.

Whooshh’s lead bioengineer Jim Otten explains the device in this company video. The footage that triggered this week’s internet sensation was posted by the Twitter account Cheddar Gadgets.

The pneumatic tube system uses variations in air pressure to shuttle fish through it. The tubes are designed to be soft and flexible, allowing the system to create a pressure differential across the fish and move it forwards.

To keep the fish breathing, the tube is equipped with water misters every few metres. The pressure on the salmon in the tubes is roughly equivalent to the pressure it would face about 50 centimetres of water, the company says.

The videos lighting up the internet this week show salmon being manually inserted into the tubes, but the system is designed to allow volitional entry too, in which fish take the ride of their own will.

To enter the tube, the fish first slides into an initial chamber that functions like an air lock. Pressure is equalised around the fish before the tube opens and it flung forward.

The tubes can transport around five fish at a time, the company claims this allows it migrate an entire schools of salmon in just a few hours.

The biggest test so far was in 2017, when the company demonstrated a 580 metre tube called the Whooshh Fish Transport System (WFTS) at the Cle Elum Dam in Washington as part of efforts to rehabilitate the area’s fish population. It can be seen in action, here.

Questions have been asked about the salmon cannon’s efficacy compared to more conventional methods of fish transport – such as fish ladders or catch-and-release programs.

Research published in 2016 found that the tube did not overly harm the salmon. However, a 2018 US federal report on the 2017 Cle Elum Dam trial saw just a 36 per cent survival rate on the first release day.

Whooshh’s VP of Biological and Environmental Sciences, Janine Bryan, says the fish used in the Cle Elum trial had been subjected extra stress from being manually imported into the river before the experiment.

“Due to a thermal barrier that set up downstream in the Yakima River, [the study] only involved ‘outplanted’ fish, not ‘native or wild’ fish,” she told reporters.

“The outplanted fish were twice trucked before being transferred into the non-native Cle Elum river waters which they did not recognize and thus were not motivated to volitionally enter the fish passage system and had to be netted and hand transferred — all factors that can influence the stress and survival of the fish.”

A second 2017 experiment conducted by Pacific Northwest National Laboratories (PNLL) published early in 2019 had a much higher success rate. In that study, only one fish died (“due to a human error during the system setup”) and just 3 per cent had signs of injury.