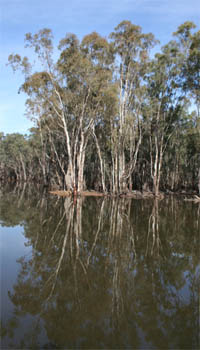 A huge flood began in Victoria this week but luckily, it was intentional.

One of the largest man-made floods in Murray River history has been triggered in northern Victoria to flood the Gunbower forest.

Authorities have spent around $15 million on better control methods, which will be put to the test by nearly 200 gigalitres flowing through the forest over the next six months.

A new system of weirs and other infrastructure will allow high-tech and specific control over the large environmental watering, which will be pushed along by the forces of gravity.

Authorities say around 70 per cent will be returning to the river and the end of the course.

This week’s release is the culmination of over a year of planning.

“There has been a huge degree [of] investment in the computer modelling to understand, given all the land surface levels right throughout the forest, how... the flooding [would] behave,” Damian Wells, from the North Central Catchment Management Authority, told the ABC.

“That's being look at over a range of different scenarios.

“So we've now got what we think is a very good feel for potential interactions with private land and all of those sorts of things,” he said.

Mr Wells says it will be the perfect time to visit the Gunbower forest.

“We are encouraging people to get out and have a look,” he said.

“For the next month or six weeks there won't be a lot to see, but further on into late July, August and so forth there will be an uptick in activity in the forest.”