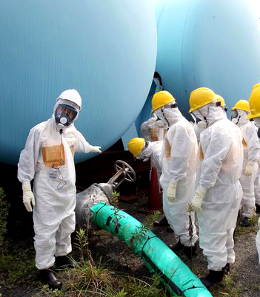 Authorities have officially recognised a case of cancer caused by clean-up work at the Fukushima power plant.

A 41-year old man worker at the Fukushima Daiichi nuclear power plant has become the first to gain official recognition that his cancer is linked to his clean-up work.

The unnamed man was diagnosed with leukaemia in January 2014 after he spent a year working on badly-damaged reactor buildings.

So far almost 45,000 workers have been involved in the clean-up since the earthquake/tsunami disaster in 2011.

The man was contracted by Fukushima’s operator, Tokyo Electric Power (TEPCO) to install covers on two damaged reactor buildings between October 2012 and December 2013.

The announcement by Japan’s health ministry will deal a big blow to TEPCO, which is in the middle of spending billions to repair the plant on a wildly optimistic timeline.

The Japanese government shares Tepco’s optimism, and is pushing for people to return to communities nearby, which it has declared safe.

Officials say the man wore protective gear while at the plant, but would still be awarded compensation.

“While the causal link between his exposure to radiation and his illness is unclear, we certified him from the standpoint of worker compensation,” the health ministry official said.

Three other plant workers with cancer diagnoses are trying to prove that their illnesses are linked to the accident as well.

“We would like to offer our condolences to the worker,” a TEPCO spokesperson said.

“We will continue to reduce the radiation dose of the working environment and manage thoroughly workers’ exposure to radiation.”

The man was exposed to 16 millisieverts (mSv) of radiation at Fukushima, as well as a further 4 mSv in three months he spent at another nuclear plant in 2012.

Compensation is awarded to workers after they are exposed to 5 mSv in a year, the health ministry says.

TEPCO has previously admitted that 21,000 of the 45,000 clean-up workers at Fukushima have been exposed to more than 5 mSv of radiation from March 2011 to the end of July this year.

“A dose of 100 mSv per annum is very high, and 250 mSv would be unconscionable,” Dr Ian Fairlie, an independent consultant on radioactivity in the environment, told reporters for the Guardian.

“Clearly what is happening at Fukushima Daiichi is that thousands of temporary workers are being exposed to high radiation levels, then dismissed when their dosimeters reach the limit.”

“This is a landmark decision from the viewpoint of workers’ rights, and it’s probably just the tip of the iceberg,” Shinzo Kimura, associate professor of radiation and hygiene at Dokkyo Medical University, told Agence France-Presse.

“This is a massive blow to the IAEA [the International Atomic Energy Agency], which stated in September of this year that no discernible health effects due to the exposure to radiation released by the accident are to be expected,” Greenpeace Japan said.

“The impacts both from the initial releases and from the ongoing nuclear crisis have yet to be fully seen, as the historical example of Chernobyl demonstrates,” Greenpeace Belgium says.

“Greenpeace calls on the IAEA and the Japanese authorities to retract their unsubstantiated and unscientific statement.

“The workers on-site and the citizens of Fukushima are suffering from the consequences of this nuclear disaster. Denying this reality is both dismissive of their suffering and undermines their fight for justice for themselves and their families.”