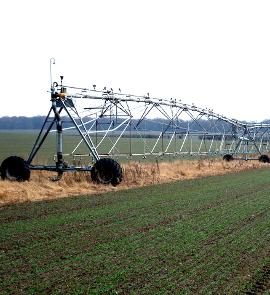 The Federal Government has put up more funds for irrigators looking to upgrade their equipment in exchange for some of their water rights.

New money is available for the On-Farm Irrigation Efficiency Program in the Murray-Darling Basin, wherein the government pays farmers to upgrade their water infrastructure in return for water allocations.

The plan pays farmers in groups as a trade for their environmental water allocations.

The funding package was worth about $100 million when the program began, but now the government says the submissions from its delivery partners were of such a high standard that it will be increased to $158 million for works this year.

It is good news for some, but some tomato farmers say the program still does not cover them.

Liz Mann, from the Australian Processing Tomato Research Council, has told the ABC that only those farmers from the groups she represents in Victoria who wanted overhead spray irrigation will see any funding .

Senator Simon Birmingham, Parliamentary Secretary for the Environment, says the increased funding was made available from savings in other water projects.