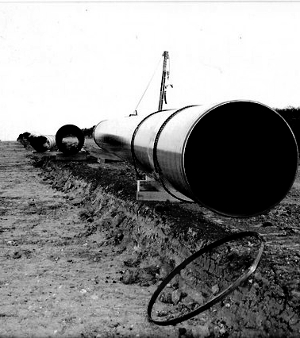 The Victorian Government has provided $32 million for the first stage of a 1,600-kilometre pipeline.

The pipe to the East Grampians region is aimed at providing water security for agricultural producers.

Minister for Water Lisa Neville said the State Government wants the Federal Government to put in the remaining $82.5 million.

“I'm very hopeful given the business case is so strong that this will be supported by the Commonwealth Government as well,” Ms Neville said.

“That business case said there would be $215 million of economic benefit if we invest in this project.”

If the money comes together, the completed pipeline should provide supply stability for 530,000 hectares around Ararat, including the towns of Buangor, Moyston, Great Western, and Willaura.

“The catchment dams are really getting low because there's been a distinct lack of rain,” Mr Vogel told the ABC.

“What it will do is give security of supply, there's a lot of stock down this region … instead of de-stocking and putting in more crop they'll [producers] be able to keep their stock.”

GWM Water has run the development phase of the East Grampians pipeline, and will come up with a final design based on how many landowners sign up.

“It's a voluntary scheme, so what we do is go through a process of getting landowners to commit and once that commitment is there, we refine that design around that final commitment.”

“We can move as of today effectively and begin that process,” he said.

“We'd like to think that probably within 12 months' time, even possibly sooner, we'd be putting pipe in the ground.”