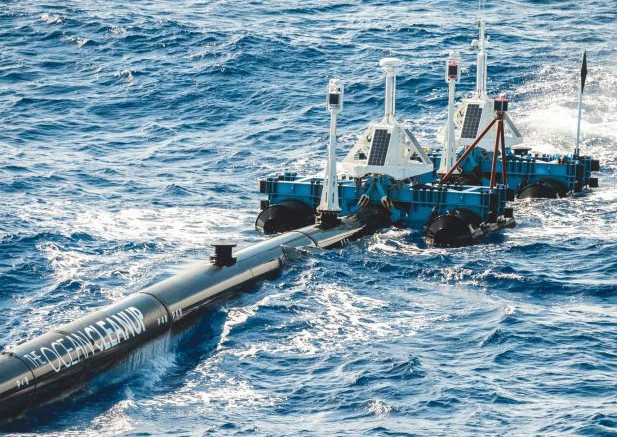 A giant floating device is having a second attempt at cleaning up the huge, swirling island of garbage in the Pacific Ocean.

The Ocean Cleanup project has announced on Twitter that its 600-metre-long floating boom has been sent back to the Great Pacific garbage patch this week.

The boom broke apart late last year under constant waves and wind, and had to undergo four months of repair.

“Hopefully nature doesn’t have too many surprises in store for us this time,” Ocean Cleanup project creator Boyan Slat tweeted.

“Either way, we’re set to learn a lot from this campaign.”

The device is fitted with solar-powered lights, cameras, sensors and satellite antennas, allowing it to communicate its position at all times.

It works in tandem with a support vessel to fish out the collected plastic every few months and transport it to dry land.

It features a plastic barrier with a tapered three metre deep screen that acts like a coastline, trapping some of the 1.8 trillion pieces of plastic that scientists estimate are swirling in the patch.

The organisation says its marine biologists on the support vessel have not observed any environmental impact.

Mr Slat plans one day to deploy dozens more of the devices to skim plastic debris off the surface of the ocean.