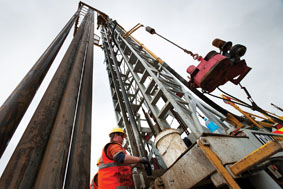 A scientific review and moratorium on hydraulic fracturing begins in the NT today.

“I announce that the Government will as of today implement this election commitment to introduce a moratorium of hydraulic fracturing of the Territory's unconventional gas resources,” Mr Gunner told the South East Asia Australia Offshore and Onshore Conference.

The moratorium comes on the same day as the terms of reference for the inquiry into hydraulic fracturing were launched.

“You know better than anyone that our continued ability to expand the resources industry is completely dependent on the social approval and license of the people of the Northern Territory,” he told those at the oil and gas summit.

“If we do not gain and keep the trust of Territorians we will not be able to progress our economic agenda.”

The terms of reference require the panel undertaking the inquiry into fracking in NT to go over piles of scientific evidence.

The panel is also seeking ways to make sure the industry meets best fracking practice, assess mitigation and rehabilitation methods used during fracking, and provide ideas for research to improve gaps in scientific understanding.