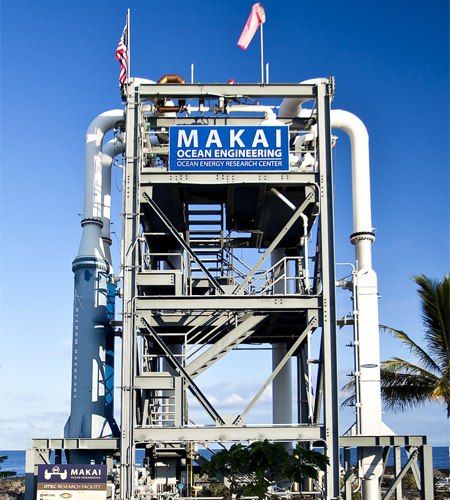 Engineers in the US are reviving an old method of generating electricity using the change in ocean temperatures.

Ocean thermal energy conversion (OTEC) takes advantage of the difference in temperature between the cold depths of the ocean and warmer water near the surface.

The first power plant was destroyed by storms, and the OTEC system never really recovered in the subsequent decades of cheap oil.

But now, as demand for renewable energy and calls to end carbon emissions abound, OTEC may rise from the depths again.

A new plant is under construction by Makai Ocean Engineering in Hawaii. It is expected to produce power for around 120,000 homes on the island, powering about ten per cent of its inhabitants.

The whole OTEC system relies on ammonia, with its low boiling point compared to other liquids.

Ammonia is passed through pipes surrounded by warm water, which causes it to evaporate into gas, which powers a turbine and generates energy.

Freezing cold water from the ocean depths (below 900 metres) is used then to reverse the process, returning the ammonia back to liquid form, and providing more power to the turbines as it falls.

Makai Ocean Engineering says its new plant may actually move from its current location and go further out into the Pacific Ocean.

This would mean the pumped water had less distance to travel and could be used more efficiently.

One of the major benefits of the technology its ability to run around the clock, unhindered by atmospheric effects.

The Makai plant is seen as a test run, with renewable energy firms around the world looking for positive outcomes from it and similar schemes being set up in Japan and South Korea as well.