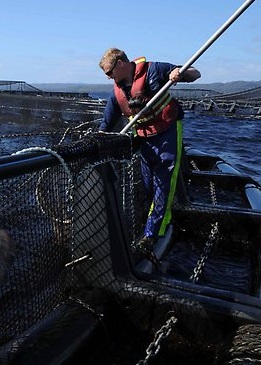 Tasmanians may have enjoyed exceptionally warm summer waters in recent years, but experts say it will not be good for the aquaculture industry.

Scientists have analysed data from September 2015 to May 2016, during which time there was a heatwave that they say is the longest and most intense recorded off Tasmania's east coast.

“Through the summer period, at least in the peak of the summer, we would see something like about 16 to 17 degrees Celsius and we saw it up to about 19.5 degrees Celsius,” climatologist Neil Holbrook told the ABC.

“In scale it was about half the size of Tasmania and it was more than 3 degrees above climatological average and went for about eight months.

“This was the strongest marine heatwave ever seen in the region.”

The heatwave was driven by a big surge in the East Australian Current.

“Those warm waters came in the form of eddies but this was particularly strong and is consistent with a climate change response,” he said.

“The impacts were quite extensive. We saw species' range extending that we've seen in the past but were more prevalent than we've seen before, things like mahi mahi, yellowtail king fish and snapper.”

“The new species might actually impact on the existing species but I think the problem is that the species that are migrating that are coastal, will come down to Tasmanian waters.

“But then they've got nowhere else to go really because then we go into the Southern Ocean. So that is a potentially a problem.”

The warm waters were also responsible for the mass death of black lip abalone in some areas, and a devastating outbreak of the Pacific Oyster Mortality Syndrome (POMS), costing the industry millions of dollars.

“There was salmon compromised to [the point that] salmon growers noticed a performance decline or performance drop,” Dr Holbrook said.

“The type of response we saw in the region is consistent with climate change and our analysis suggests an event of this magnitude is more likely under climate change,” he said.

But the researchers say it is not too late to mitigate climate change factors.

“We can choose to mitigate by reducing carbon emissions. That will have an impact in the longer term over a climate change response from human activities.

“We need global governments to work together and in unison to try and combat this problem.

“A response on climate change will go a long way to helping reduce the impact of many, many things such as marine heatwaves that we've seen.”