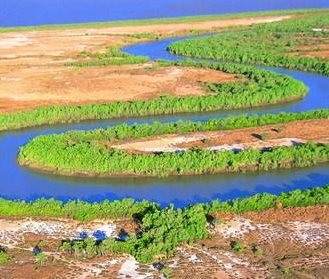 The Berejiklian Government wants the 2012 plan adjusted so more water can be given to farmers during drought. This would require current water resource plans to be paused until the drought has broken.

MLDRIN Chair and Nari Nari man, Rene Woods, said the Government should listen to the people it represents.

“Campaigns led by irrigators and the NSW National Party to derail the Basin Plan do not represent the interests of all communities across the Basin. Governments must listen to all voices in this debate, not just the loudest and most belligerent,” Mr Woods said.

“Rivers are our lifeblood, sustaining our culture and bringing sustenance, health and wellbeing to our communities. Without healthy, flowing rivers, all communities and livelihoods in the Basin are at risk.

“Today, rivers like the Baaka [Darling] and Macquarie are in a state of emergency. First Nations People have been marginalised from ownership of land and water. Now our communities and culture are suffering as we watch our waterways in terminal decline.”

Mr Woods said the current conditions are not a result of the Basin Plan.

“No one pretends the Plan is perfect, but it is better than no Plan at all. We need an ambitious Basin Plan to restore our rivers to health, with strong targets for recovering water for wetlands, billabongs and iconic red gum forests,” he said.

“We are dismayed that the NSW Government wants to stall the progress of Water Resource Plans, a key State responsibility under the Basin Plan. This is a smack in the face for Traditional Owners who participated in consultation in good faith to help develop these plans over the last two years.

“Water Resource Plans provide for recognition and protection of Aboriginal cultural values related to water. We need to see them accredited and implemented to stop devastating impacts like the Lower Darling fish kills.”

“The NSW Government’s proposal to remove the barrages on the Lower Lakes would be an environmental disaster and would devastate an area of deep cultural significance to the Ngarrindjeri people,” Mr Rigney said.

“Fresh water flows into the Lower Lakes, flushes salt from the entire Basin system and provides base-flows for water delivery and environmental benefits along the entire river. NSW should focus on addressing the drastic ecological decline on the rivers under their control rather than pursuing illogical, quick-fix solutions in other States.”

Murray-Darling Basin Authority chief Phillip Glyde has issued a statement in response to a protest convoy to Canberra calling on governments to ‘can the plan’.

“We know communities across the Murray-Darling Basin are battling against one of the worst droughts on record and it’s taking its toll on our landscape, people’s businesses, mental health and morale,” the statement said.

“We’re seeing widespread dust storms and bushfires, towns are running out of water, and our native fish are under threat. Some First Nations are telling us they’re concerned about the quality of drinking water and the cultural wellbeing of their communities. There is no one this drought hasn’t touched.

“Pausing or ditching the Basin Plan wouldn’t turn the taps or pumps on – and it wouldn’t alleviate the pain being felt in these communities during drought … In these times, remaining committed to restoring the health of the Basin is important.”