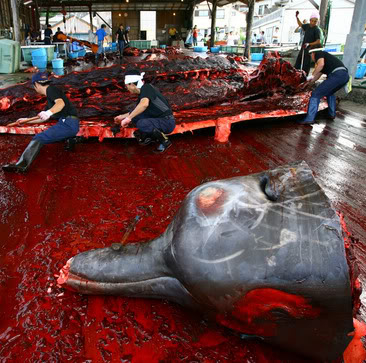 Japan will kill just 333 minke whales in the Southern Ocean next year, after it unveiled its reduced whaling “research” programme.

A legal setback instigated by court action from Australia has seen Japan decide to slaughter two-thirds of its previous quota.

The plan means that over the next 12 years, Japan will destroy a total of 3,996 whales, which it says will be for research purposes, despite the scientific lunacy of the claim.

Japan suspended its annual whale hunt after an International Court of Justice case brought by Australia and supported by New Zealand.

In it, lawyers argued that Japan’s program was not scientific, and was clearly a cover for commercial whaling.

The nation has committed to slaughtering the giant, rare mammals once again in 2015, but has drastically reduced the amount of death it will reap.

Some speculate that the quota has been reduced to save the reputation of whalers, who have seen annual numbers drop drastically thanks to the intervention of groups such as Sea Shepherd.

It is insulting to the scientific community that ‘research’ continues to be used as a cover for a commercial, violent and needlessly destructive practice.

A quick check of the publications page at the Institute of Cetacean Research shows some of the “most recent scientific papers”.

The latest was released in 2012, covering “Habitat and prey selection of common minke, sei, and Bryde's whale in mesoscale during summer in the sub-arctic and transition regions of the western North Pacific”.

Other studies include “Occurrence of dwarf minke whales (Balaenoptera acutorostrata subsp.) around the Antarctic Peninsula” from 2011, and “Abundance estimates and trends for humpback whales (Megaptera novaeangliae) in Antarctic Areas IV and V” from the same year.

These studies are published by journals from Wiley, Springer, and PLoS (PDF).