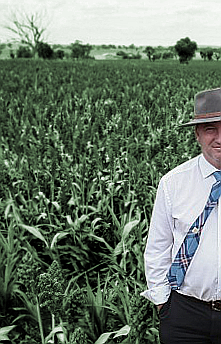 Barnaby Joyce has been accused of tilting the Murray-Darling Basin Authority (MDBA) towards irrigation interests over the environment.

Mal Peters, former director of the National Farmers’ Federation, says the MDBA has been “extremely reticent to make tough decisions” ever since Mr Joyce held the federal agriculture portfolio.

“When I started as chair, I had the impression that the MDBA was motivated by finding a balance between competing environmental, social and economic outcomes,” Mr Peters says in a written witness statement to the South Australian royal commission into the Murray-Darling basin plan.

“However, it was my observation and impression that the MDBA’s direction changed when Barnaby Joyce became minister for agriculture and water resources. At that time it appeared to me that the MBDA [sic] shifted its approach further towards irrigation interests.

Mr Peters said the final water-sharing plan went beyond details worked out in consultations. He said the relevant NSW minister at the time, Katrina Hodgkinson, was responsible for those changes.

The changes included allowing irrigators to use larger pumps at times of low flows.

The latest criticisms coincide with the NSW ombudsman’s release of its final report into the state government’s failure to adequately enforce water laws, as highlighted in the ABC’s Four Corners program.

Mr Peters and Geoff Wise, a fellow northern basin advisory committee member, will give evidence to the royal commission next week.