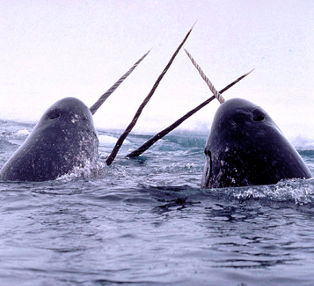 Theories have been thrown around for decades as to the function of the large protrusion, which is in fact the left canine tooth that erupts through the upper lip of males.

A new study published in the journal The Anatomical Record details extended research into the rare ocean mammal, and suggest that its tusk is almost certainly a sensory organ.

The narwhal’s tusk can sense temperature and chemical differences in the external environment, able to detect the presence of salt, food and possibly find sexually-mature females.

The report, titled ‘Sensory ability in the narwhal tooth organ system’, says the evolution of the tusk was likely triggered by two of the most powerful forces in nature – food and sex.

“New evidence presented here indicates that the patent dentinal tubules communicate with open channels through a porous cementum from the ocean environment. The ability of pulpal tissue to react to external stimuli is supported by immunohistochemical detection of neuronal markers in the pulp and gene expression of pulpal sensory nerve tissue,” the paper reports.

“New findings of sexual foraging divergence documented by stable isotope and fatty acid results add to the discussion of the functional significance of the narwhal tusk. The combined evidence suggests multiple tusk functions may have driven the tooth organ system's evolutionary development and persistence,” the authors said.

The narwhal’s heart rate changes in response to the tusk’s exposure to salt water.

“Final confirmation of sensory ability is demonstrated by significant changes in heart rate when alternating solutions of high-salt and fresh water are exposed to the external tusk surface,” the study said.

Narwhals are often referred to as the ‘unicorn of the ocean’, except they have the distinct advantage of actually existing, unlike their land-based mythological counterparts.

Lead author Martin Nweeia from the Harvard School of Dental Medicine told the BBC that the beast has a mighty fine tooth.

“If you were looking for an ideal and fascinating tooth to study there's no question this would be it,” he said.

Dr Nweeia told science press Wired that this is just the start of the investigation.

“Our premise was just to open the pathway for people understand that this is a sensory organ... now the pathway is open for people, including ourselves, to look at other variables it might also detect.”