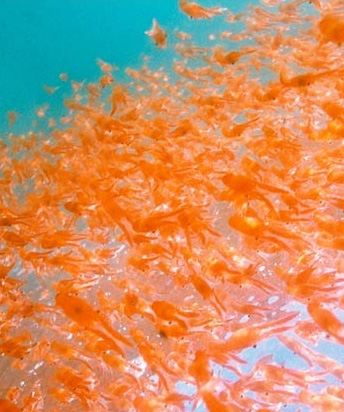 Scientists have studied the broad importance of krill – one of the animals lowest on the food chain.

Antarctic krill are well-known for their role as food for marine predators such as seals, penguins and whales.

Less well-known is their importance to the ocean’s carbon sink, where CO2 is removed from the atmosphere during photosynthesis by phytoplankton and sequestered to the seafloor through a range of processes.

A new study published in the journal Nature Communications has highlighted the influence of krill in the carbon cycle and urged consideration of the impact of commercial krill fishing on ocean chemistry and the global climate.

Led by Dr Emma Cavan, the study reviewed current scientific knowledge of the role of krill in processes that each year remove up to 12 billion tonnes of carbon from Earth’s atmosphere.

“By eating phytoplankton and excreting carbon and nutrient-rich pellets that sink to the seafloor, Antarctic krill are an integral part of the carbon cycle and a key contributor of iron and other nutrients that fertilise the ocean,” Dr Cavan said.

“Krill faecal pellets constitute the majority of sinking carbon particles that scientists have identified in both shallow and deep waters in the Southern Ocean.

“Antarctic krill grow up to 6-centimetres long and weigh around one gram, but they swarm in such vast numbers that their combined contribution to the movement of ocean carbon and other nutrients can be huge.

“The Southern Ocean is one of the largest carbon sinks globally, so krill have an important influence on atmospheric carbon levels and therefore the global climate.”

Dr Cavan said management of the krill fishery currently centres on sustainability and krill’s role in supporting megafauna such as whales, with little attention given to assessing the significance of krill to the carbon cycle and ocean chemistry.

“Today the fishery takes less than 0.5 per cent of the available krill and only adults are targeted.

“But there is no consensus on the effect that harvesting Antarctic krill could have on atmospheric carbon and ocean chemistry nor, for that matter, how growing whale populations might also affect krill numbers.

“Southern Ocean ecosystems and chemical processes are highly complex and poorly understood, and our lack of knowledge about the extent of krill’s ability to affect the carbon cycle is a concern, given that it is the region’s largest fishery.

“We don’t know, for example, whether a decline in krill might actually lead to an increase in the biomass of phytoplankton, which are also integral in transporting carbon to the seafloor.

”Conversely, a decline in krill would decrease the beneficial fertilisation effect that their faecal matter has on phytoplankton biomass, at the same time also jeopardising the important part krill play in circulating iron and other nutrients.

“Our study has shown there is a pressing need for further research to address these and other questions about the significance of krill, as well as for more accurate estimates of their biomass and distribution.”