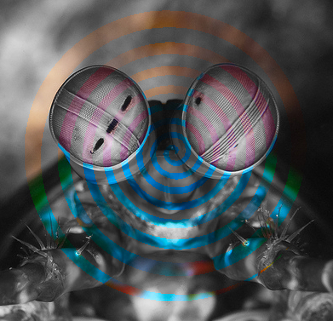 Australian experts have discovered that the ocean lights up with secret forms of communication between marine animals, and they might have applications in satellite remote sensing, biomedical imaging, cancer detection and computer data storage.

Dr Yakir Gagnon – from the University of Queensland’s Brain Institute’s (QBI) - has built on a previous study that found the mantis shrimp (Gonodactylaceus falcatus) can reflect and detect circular polarising light.

“This is extremely rare in nature and, until now, no-one has shown what they use it for,” he said.

“This study shows that the shrimp use circular polarisation as a means to covertly advertise their presence to aggressive competitors.”

QBI’s Professor Justin Marshall, who heads the Australian part of the polarisation team, says it is more common for animals to communicate with colour.

“In birds, coloured feathers advertise gender and territory and in the ocean, reef fish display with colour – this is a form of communication we almost understand,” he said.

“What we’re now discovering is that there’s a completely new language of communication.

“We’ve now determined that mantis shrimp display circular polarised patterns on the body, particularly on the legs, head and heavily armoured tail, which are the regions most visible when they curl up during conflict.

“These shrimp live in holes in the reef and they like to hide away. They’re secretive and don’t like to be in the open.”

“We found that the shrimp chose the unpolarised burrow 68 per cent of the time – suggesting the circular polarised burrow was perceived as being occupied by another mantis shrimp,” he said.

“They know – or they think they know – there’s another shrimp there.”

“Cancerous cells do not reflect polarised light, in particular circular polarising light, in the same way as healthy cells,” he said.

“Cameras, designed by our US collaborators in Washington University in St Louis under Associate Professor Viktor Gruev, have been equipped with polarising sensors inspired by mantis shrimps and may detect cancer cells long before the human eye can see them.”

Professor Marshall was also part of a second study with QBI alumni Dr Martin How, which showed that linear polarised light was used as a form of communication by fiddler crabs.

“These animals seem to have evolved in-built sun glasses to help them survive and communicate on the mudflats,” he said.

The studies are available in the journal Current Biology.