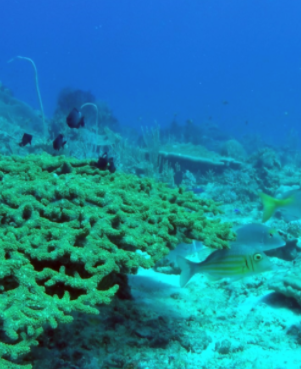 Scientists have collected the first fine-scale maps and imagery of reefs and submarine canyons in the rarely visited Arafura Marine Park.

The new study by the Australian Institute of Marine Science (AIMS) and Geoscience Australia has revealed seafloor environments with surprisingly diverse coral and fish communities.

Arafura Marine Park is the northern-most of the 58 Australian Marine Parks situated around Australia.

The marine park is managed by Parks Australia and protects unique marine habitat while also providing multiple benefits to Traditional Owners, regional communities and the economy through permitted sustainable activities.

Indigenous people have been sustainably using and managing sea country in the Arafura Marine Park for tens of thousands of years with sea country valued for cultural identity, health and well-being.

“Information from this research voyage will provide critical baseline data to guide the management and protection of the Arafura Marine Park and sea country,” Dr Miller said.

“This in turn will contribute to sustainable economic opportunities, and provide for the enjoyment and benefit of this special environment for current and future generations.”

In the north of the park, at the outer edge of Australia’s continental shelf, the scientists visited Pillar Bank, part of an ancient river system that began its transformation to ocean some 14,000 years ago. In the shallow, southern area of the park, they visited Money Shoal, some 200 km north-east of Darwin.

Both areas were mapped in detail using multibeam sonar, covering a total area of 350 square kilometres.

Guided by the new maps, scientists stationed baited cameras on the seafloor, towed a video camera behind the ship, and sampled the sediments to build inventories of marine life.

“Before the survey we only had blurry images that hinted at Money Shoal and Pillar Bank,” says Kim Picard of Geoscience Australia, who led the multibeam mapping.

“Now we have maps at two to three metres resolution and can see so much more detail of the shape of the seabed, at depths to 200m.

“On Pillar Bank, for example, we discovered unusual mounds that rise 40 m above the seabed and have deep scour holes around them, carved out by the strong tidal currents. The cloudy waters here made it difficult to picture the sponges and other filter feeding invertebrate communities.”

In the clear and relatively shallow waters of Money Shoal, the team had a clear view of hard coral and sponge gardens and a diverse range of colourful coral reef fishes and sharks in water depths of ~15 to ~70 m. In the deeper plain areas surrounding Money Shoal, there are hints of a relict dune system, hosting unexpectedly diverse communities, and an ancient river system.