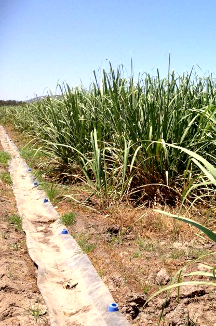 A huge Integrated Food and Energy Development (IFED) has been declared a “state co-ordinated project” in Queensland, with residents soon able to have their say on the plan that will consume over half a million megalitres from a nearby river.

The IFED idea is a first for the state, combining two forms of agriculture on a multi-purpose site.

The plan will see irrigated sugar and guar gum crops grown on 65,000 hectares of land west of Georgetown in central North Queensland.

In addition to the plants, the massive site will also contain a cattle property and abattoir.

All of this is thirsty work, with the IFED plan looking to drain 550,000 megalitres of water per year from the nearby Gilbert River.

This weekend will see whether locals are in support of the plan, which Etheridge Shire mayor Will Attwood says will expand the town from 200 to 700 or 800 people.

Meetings are on in Karumba this Sunday and then on Monday in Georgetown. Councillor Attwood says if locals’ concerns can be met, then the project would be a massive boon.

“They've been supplying most of the information to us that we need, but I suspect the town itself really hasn't been privy to all that information and what I'm hoping is that they will come along to be able to ask questions and see the sort of impact it will have on their business,” he told the ABC.

“What we are looking at now is our water supply, sewerage, how we service this amount of people and where they are going to live.”

Chairperson of the IFED initiative, Keith De Lacey, says the project has been designed with the environment in mind.

“There are no shortcuts. This is a public environmental process.”

“But it will be easier for us in the sense that all of the approval processes will be co-ordinated by the government.”

“We're planning to use 550,000 megalitres, which is 10 per cent of the average yearly flow of the Gilbert River. We're confident that is sustainable.”

Public consultation for the Etheridge Integrated Agriculture Project will close on February 10.