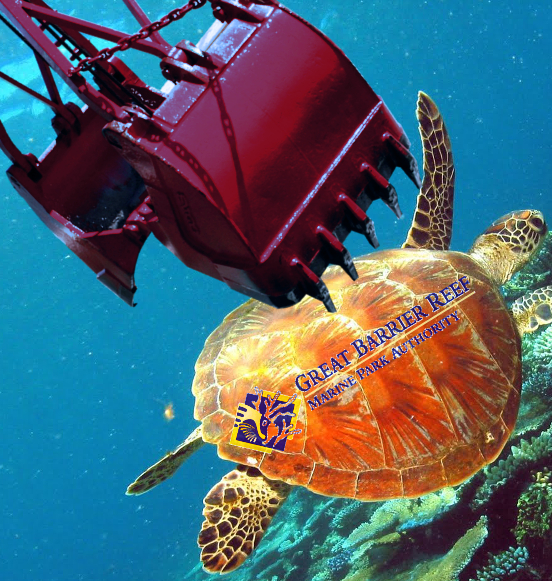 Conservationists are pushing for an overhaul of the Great Barrier Reef Marine Park Authority, saying it has failed in its duties.

At the same time, it has been revealed that one developer made a big donation to the Queensland LNP just a week before approval was given to his dredging application.

The most recent approval for the dump of dredge spoil in the marine park was the last straw for many ecologically-minded observers, who say that the Great Barrier Reef Marine Park Authority (GBRMPA) appears willing to ignore opposition from its own scientists to appease the business interests in Queensland.

Internal documents leaked by media outlets reveal deep divisions between scientists and bureaucrats around the decision to approve the dump of 3 million cubic metres of dredge spoil, a by-product of works to expand the Abbot Point coal terminal.

GBRMPA director Jon Day resigned last month after 20 years with the authority, and has since given interviews saying that the body is divided between its environmental aims and business environment.

The World Wildlife Fund says the authority should be flushed-out and started again.

“Australia's best marine scientists, including the godfather of marine scientists in Australia, are all saying the worst thing that can happen to the Great Barrier Reef at this point, is to allow millions of tonnes of dredge spoil to be dumped in its waters.

“A bad decision has been made.

“That decision needs to be reversed, and the structure of the marine park authority needs to change to be stronger and more independent so we don't have decisions like these happen in the future,” Mr Leck said.

Michael Roche from the Queensland Resources Council said it is not all about science.

“At the end of the day, we can't bring the Australian economy to a halt,” he said.

“If we listen just to the scientists, that's what we'd be doing.”

Meanwhile, Fairfax Media outlets has revealed that the largest individual donor to the Queensland Liberal National Party in the past year gave $150,000 just a week before gaining approval to dredge near the Great Barrier Reef.

The donation was made by former coal baron turned marina operator Paul Darrouzet, who was seeking approval for a $12 million expansion to his 500-berth Airlie Beach marina around the same time.

The expansion of the marina located within the Great Barrier Reef World Heritage Area required approval from both the state and commonwealth gov­ernments.

Queensland does not have the same ban on developer donations that has been the undoing of several NSW LNP members in recent weeks.

A week after the donations were made, the Queensland ­Department of Environment and Heri­tage Protection decided to approve an amendment to its environmental authority that would allow further dredging at the marina.

Federal approval for the dredging of between 100,000 and 200,000 cubic metres of seafloor was granted soon after.

The dredge spoil will be dumped in a nearby ‘disposal pond’.

Mr Darrouzet argues that he has been a big donor to the LNP since 1980, and that there is no link between these specific amounts and his marina project.

He also pointed out that the marina was an entire kilometre from the Great Barrier Reef Marine Park.

The investigations into Mr Darrouzet’s donations are part of the Financial Review’s ongoing break-down of LNP money sources.

The paper posted the following graphic showing a couple of the biggest benefactors. 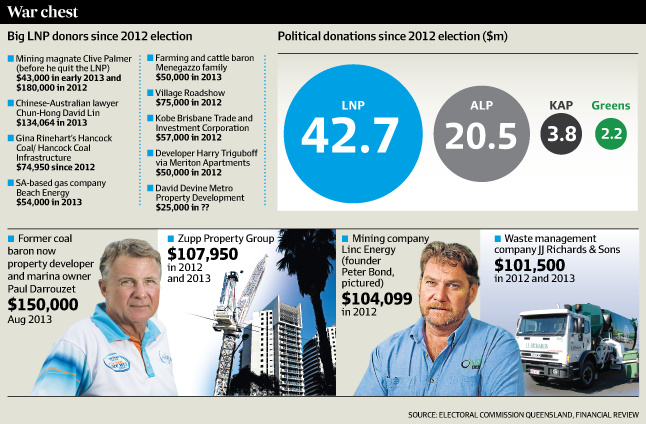