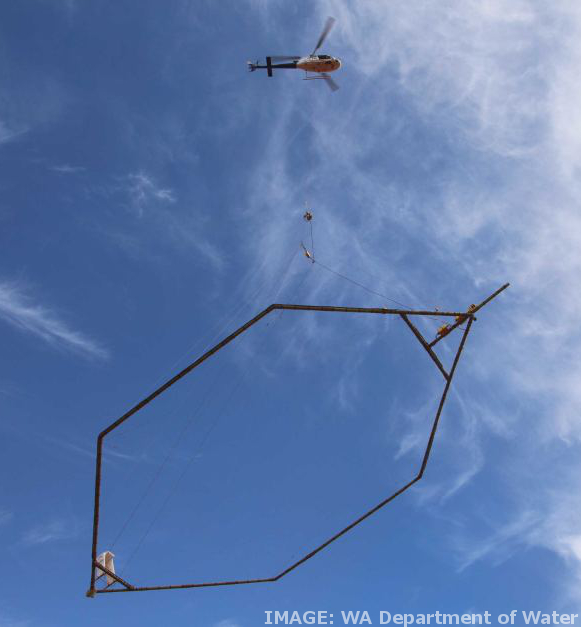 Hydrogeologists from the CSIRO used a giant magnet dangling beneath a helicopter to map the waterways more than 200 metres below the surface.

They found some of the deepest ancient riverbeds ever found in WA, formed in the bedrock around 2.5 million years ago.

The Government says the discovery could be a big boost for nearby towns, mining firms and farmers.

Hydrogeologist Scott Macaulay said it was an incredible find.

“The annual rainfall of Meekatharra is around 260 millimetres a year,” he told the ABC.

“So any development in the area — be it a new town water supply, be it a pastoral development or a mining development — is dependent on these water resources for that development to take place.

“It is an area with large prospective gold resources [and] magnetite iron ore resources.

“Obviously the demand for those materials goes in cycles. At the moment demand may be low but it can switch up very rapidly and they may need to look for and access water very rapidly.”

Local farmer and former Pastoralists and Graziers Association president Rob Gillam said it was a good prospect, but warned that accessing the water would be a big challenge.

“Given that the state is working on the fact that they know they need to update tenure and get it into a manner that will entice large investment projects,” he told reporters.

“That would have to be done before you get anyone coming to the Murchison looking to use those deep water supplies in a large project.

“But even so, those people are more attracted to the north where water is easier to get.

“It's good to know it's there, because in the years to come — maybe 10 or 20 years' time when the tenure has been sorted out so that it's more attractive to venture capitalists — then to know that the water's there and should someone want to get up with a project, then you never know it may happen.

“But I don't see it happening in the short term.”

Director of the WA Conservation Council Director, Piers Verstegen, said the water must be managed sustainably.

“When we find new water resources, we need to make sure they're managed in a sustainable way,” he said.