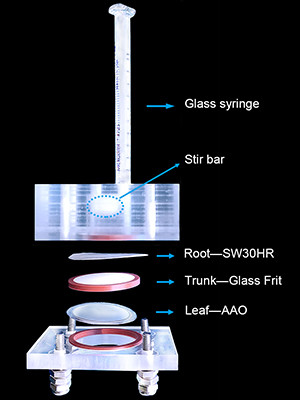 Researchers are looking to steal the water-purifying ability of mangrove trees.

A team of researchers at Yale University has now developed a water-purifying device that mimics the mangrove.

The device, which the researchers call an artificial mangrove, combines the desalinating effects of the mangrove’s root, the capillary pumping of the leaves, and the water-conducting capability of the stem.

Key to its success is its ability to generate a high level of negative pressure, similar to the effect of drinking through a straw.

In the synthetic mangrove, evaporation from specially designed membranes — acting as ‘leaves’ — creates a large negative pressure, which drives desalination of salty water through a semi-permeable membrane ‘root’.

In addition to offering a better understanding of plants’ plumbing systems, it could lead to new desalination technologies, the researchers say.

“We’re not biologists, but we’re coming at this from an engineering perspective.”

He said the work could potentially lead to the creation of small-scale devices for separating solutions.

“Typically, you have an expensive pump that creates really high pressure to separate those things,” Mr Werber said.

“With the mangrove device, you can use the evaporation to drive that completely passively.”

Co-author Jongho Lee, a postdoctoral researcher, said the device also has the potential to be used for flood reduction by incorporating it into ‘sponge cities’ — urban areas designed to absorb and catch rainwater and quickly remove it.

“Buildings could be designed to work as mangrove trees: Their outside walls would work as leaves and the foundations would act as roots filtering out contaminants,” he said.