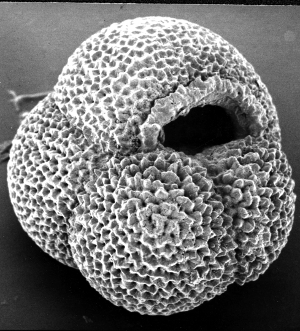 Research has revealed a new way to gauge sea-level changes and deep-sea temperature changes over the past 5.3 million years.

An international team including Australian scientists have developed the new technique, which is based on examining oxygen isotope levels in fossils of microscopic plankton dating back millions of years.

The microscopic fossils were recovered from the Mediterranean Sea in recent years.

Lead researcher, Professor Eelco Rohling from the Australian National University (ANU), says the team focused on samples from the Strait of Gibraltar, which is particularly sensitive to sea-level changes.

“As continental ice sheets grew during the ice ages, flow through the Strait of Gibraltar was reduced, causing measurable changes in oxygen isotope ratios in Mediterranean waters, which became preserved in the shells of the ancient plankton,” he said.

Co-author Prof Gavin Foster from the University of Southampton says the research has for the first time found long-term trends in cooling and continental ice-volume build-up did not happen at the same time.

“In fact, for temperature the major step toward the ice ages of the past two million years was a cooling event at 2.7 million years ago,” he said.

“But for ice-volume, the crucial step was the development of the first intense ice age at around 2.15 million years ago.

“Before our results, these were thought to have occurred together at about 2.5 million years ago,” Foster said.

Professor Rohling said the findings will help scientists understand the nature of ice ages and development of coastal sediment.

“A more refined sea-level record over millions of years is commercially interesting because it allows a better understanding of coastal sediment sequences that are relevant to the petroleum industry,” he said.

“Our record is also of interest to climate policy developments, because it opens the door to detailed comparisons between past atmospheric carbon dioxide concentrations, global temperatures, and sea levels, which has enormous value to long-term future climate projections.”

More details are available in the full report published in the journal Nature.